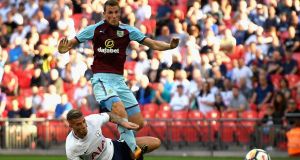 Despite failing to find top gear against a typically resolute Burnley side, Spurs had looked set to grind their way to three points thanks to Dele Alli’s second goal of the season. But the visitors’ club record signing pounced on a delightful through ball from Robbie Brady with just seconds remaining to make sure that talk of a Wembley hoodoo will not go away as the Premier League goes into an international break.

The timing of the equaliser was a shock but there was little else surprising about this match in which Spurs dominated possession, but Burnley were resolute in defence and maximised their opportunities going forward.

Spurs were very well aware of the challenge presented to them and for much of the first half the hosts set about addressing it as if it were a tricky crossword clue. All that was necessary to work out an answer was in front of them, they just had to find the right strategy.

They tried shots from range, Christian Eriksen’s effort in the 10th minute deflected off James Tarkowski for the host’s first corner. They sought to draw fouls in and around the area; when Alli went down under Matt Lowton’s challenge in the 17th minute, Harry Kane came close to opening the scoring, but Ben Mee did just enough to put him off his header from Eriksen’s set piece.

They went direct, a long ball to Son Heung-Min in the 36th minute knocked down to Alli on the edge of the box, whose fierce shot was deflected wide. They sought to overlap with the full backs, Ben Davies teeing up Kane again, this time in the six-yard box, only for the ball to get tangled in the England forward’s feet, giving Burnley’s defence enough time to block the shot.

There was no panic from the hosts, but equally none on the part of the visitors. Burnley dominated the first five minutes of the half and created chances as it closed. In between times they were happy simply to repel the pressure and maximise their opportunities at set pieces, where Brady’s delivery was consistently dangerous. The Irishman might even have opened the scoring himself, when his early cross from open play disappeared in the glare of the sun and forced Hugo Lloris to tip the ball wide for a corner.

The process continued at the start of the second half, Spurs probing, Burnley repelling, until one tiny little mistake changed the face of the game entirely. Spurs won a corner in the 49th minute, their eighth of the match. Eric Dier met the cross with a stooping flick, but it flew straight to Mee in the heart of the Burnley defence. It was a straightforward opportunity to clear, but what he had done a dozen times in the first half, Mee mucked up in this moment, shinning the ball back across the area and into the path of the lurking Alli. The England star saw his first shot blocked by Lowton but the rebound was buried.

Alli barely paused to celebrate the goal, almost as if to suggest that breaching the Burnley wall was the bare minimum. The expectation might have been that the visitors would now have to open up and better quality chances would soon arrive. Sean Dyche saw that expectation and raised it, switching to a 4-4-2 formation and introducing Wood into the fray.

Burnley crafted their best chance of the match shortly afterwards. Scott Arfield advanced to the edge of the Spurs box and played in Brady, now switched to the right of midfield. The Dubliner took a touch then smashed the ball with the outside of his right boot forcing Lloris to claw the ball away from his top corner. After last week’s high-profile error against Chelsea, the home fans took great pleasure from bellowing his name.

That chance aside, however, Spurs dominated. Kane was presented with several decent opportunities to break his August duck, including a header that was cleared off the line from six yards out and a one-on-one with Tom Heaton that the goalkeeper won. Alli should have doubled his tally too, shooting straight at Heaton from six yards out.

As the match edged towards full-time however, Burnley began to find space in between Spurs’ full backs and their centre halves. Lloris was forced to rush from his area to rob Wood with a slide tackle. Stephen Ward’s cross from the byeline almost found the New Zealander, before Jan Vertonghen cut it out. Then finally Brady put his right foot to work again, curling a pass through three Spurs defenders to find Wood waiting to drive the ball back across goal and into the net.