Barcelona get off to winning start at subdued Nou Camp 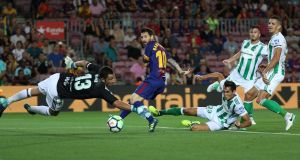 Barcelona got off to a winning start in La Liga on Sunday, beating Real Betis 2-0 in a subdued atmosphere at the Nou Camp in the first game since the deadly attacks in the Catalan capital and the town of Cambrils.

Betis defender Alin Tosca diverted a cross from the lively Gerard Deulofeu into his own net to put Barca ahead in the 36th minute, while the former Everton forward, who returned to his boyhood club this summer, also laid on the pass for the second goal which was smashed in by Sergi Roberto in the 39th.

Lionel Messi was the fulcrum of most of Barca’s creativity and more responsibility was placed on his shoulders due to the absence of Luis Suarez and Andres Iniesta but the Argentine was denied a goal, hitting the woodwork three times.

Despite the win there was a subdued feeling at the Nou Camp before and during the game with only 56,480 supporters going to the 99,000-capacity arena. The club announced it had granted fans’ requests to return tickets in the wake of Thursday’s attacks, which killed 14 people and injured more than 100.

“It was a moving tribute, we wanted to celebrate this victory and I dedicated the (first) goal to the victims and their families,” Deulofeu told reporters.

“What happened was terrible, we hope something like this never happens again. We are not afraid but this needs to stop. This victory was for them.”

Barca’s players paid tribute to the victims by wearing “Barcelona” on the back of their shirts instead of their names.

The mayor of Cambrils, vice mayor of Barcelona and the city’s police chief were invited to the presidential box, where 14 seats were covered up – one for each of the victims who died.

As in every stadium in Spain’s top two divisions this weekend a minute’s silence was held before the game and it was followed by chants of “We are not afraid”.

There was also a subdued feeling on the pitch with Barca still looking as if they had not digested their 5-1 aggregate defeat to Real Madrid in the Spanish Super Cup or filled the huge void left by the departure of Neymar.

Barca took their time to find their feet, with Messi coming closest to scoring with a free kick that struck the post before Tosca sent the ball beyond his goalkeeper Antonio Adan as he tried to prevent Messi from reaching Deulofeu’s pass.

Betis debutant Sergio Leon had a gilt-edged chance to equalise moments later as he ran free on to a through ball but Javier Mascherano made a perfectly timed tackle to bring the attack to an end.

A minute later Deulofeu showed persistence to win back possession on the right-hand side, cutting the ball back for his fellow academy graduate and Catalan Roberto to double Barca’s lead.