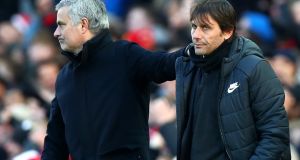 Yesterday’s game at Old Trafford concluded a juicy storyline that began in the first week of January, when Antonio Conte chose to ignore the ancient wisdom about never wrestling a pig, and allowed himself to be drawn into a public dispute with Jose Mourinho.

The headlines were that Mourinho had referred to Conte’s involvement in a match-fixing scandal, while Conte called Mourinho “a little man” and “fake”, but the sharpest insult was less remarked-upon at the time.

At one point Conte had been asked whether Mourinho was hurling abuse his way to distract attention from his own side’s poor form. “Now it is very difficult to do only cinema,” Conte had said. “Maybe in the past with the cinema it was enough. Now you have to show football knowledge and the cinema is not enough for the coach.”

This was probably the most serious insult ever directed at Mourinho by a rival manager. Colleagues have attacked him for having bad manners and lacking class, but Conte had gone beyond that to attack his competence, in effect deriding him as a showbiz figure who knew nothing about football.

For this reason, few victories in Mourinho’s career can have tasted sweeter. His substitute Jesse Lingard had scored the winner, while his major summer signing, Romelu Lukaku, had at last made the difference in a season-defining game against a major rival, scoring the first and creating the second goal.

Mourinho signed Lukaku after initially courting Alvaro Morata, and the contrast between their two performances was the story of the match. Morata started brightly and faded, Lukaku initially struggled but fought on to conquer. Mourinho will particularly have appreciated the fortitude Lukaku showed in scoring his goal, ignoring the pain of a clash of heads with Andreas Christensen and driving through to score.

Meanwhile, Morata has now gone nine games without a goal – with just five goals altogether since September – and he is beginning to lose the Chelsea crowd. Fans in England despise weakness, and when the player is a handsome £60 million Spaniard, the antennae are even more exquisitely attuned for any sign of it. Brave centre-forwards give the impression they revel in the rough stuff; Morata resents it a little too obviously. He needs goals, fast: failing that, the best thing that could happen to him would be to have his head split by a boot or an elbow, and then to play on with his head wrapped in a blood-soaked bandage.

You can imagine some Chelsea fans pining for the memory of Diego Costa, who was permanently delirious with battle fever. Yet Costa’s personality was too abrasive for Conte, who told him in the summer his services were no longer required. The same message has since been delivered to David Luiz, who was no less important a figure in the title-winning campaign.

It’s easy to see how Luiz would be the kind of guy who would annoy Conte. It’s not about his tendency to make defensive errors – when you bring as much quality as Luiz, the odd lapse can be forgiven. What Conte could never forgive is the attitude. Whatever Luiz is like in private, he strives at all times to project a fun and relaxed public persona, sticking his tongue out in photographs, clowning around for the cameras that follow players around everywhere, and so on. Even in the white-hot pressure of the 2012 Champions League final at the Allianz Arena, the biggest club match of his career, Luiz was the chillest dude on the pitch, sauntering about gently sledging Bayern players, and, at the moment of truth in the shootout, casually slamming his penalty into the top corner as though it was the most natural thing in the world.

A personality more different from Conte could scarcely be imagined. The coach conceives of football as he seems to conceive of life: as ceaseless struggle, suffering and sacrifice. As an outlook on life it is perhaps more realistic – and Conte certainly believes it to be more authentic – than Luiz’s happy-go-lucky stylings. The god of football demands only work, and the prize for working as hard as you can is the chance to play the next game and work even harder. This was the attitude that allowed a relatively limited footballer like Conte to play more than 400 times for a great club like Juventus.

Austerity of his regime

And yet not everyone feels as lucky to be playing at this level as Conte did. Since Conte arrived he has driven Chelsea very hard in training, and there are signs that some players are chafing at the austerity of his regime. After they lost to Watford in February, the coach gave the players three days off, simultaneously suggesting that he thought this was a bad idea. “If we want to find excuses we can find everything. Tiredness, injuries – but this is not my way to solve the problem. The problems you have to solve with work. You don’t win with excuses.” Or with days off, needless to say. It looked as though Conte had granted the players the mini-break more because he was unable to stand the sight of them than because he felt it was the best way to rekindle their form.

Even top players need a bit of carrot along with the stick. Conte is the type who thinks that carrots are for rabbits, but the next time he is tempted to attack a more-decorated rival as a mere purveyor of “cinema”, he might do better to keep quiet and reflect on the the ways in which he himself could still improve as a coach.