America at Large: McNab a seemingly forgotten part of City’s past 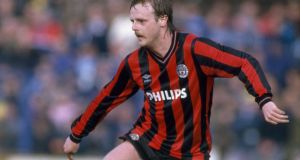 Neil McNab in his playing days for Manchester City in 1985. He made a total of 260 appearances for the club and was one of their finest players during that decade. Photograph: Mark Leech/Getty Images

Taking possession near the right-hand touchline, Neil McNab cut in towards the penalty box. As the Huddersfield Town defenders backed off, he switched the ball to his left and suddenly let fly. A low daisy-cutter in to the near corner.

Twelve minutes gone, he wheeled away with his right arm in the air, the cheers of the Maine Road faithful washing over the number 10 on his back. Manchester City scored nine more that memorable November afternoon in 1987 but it was the moustachioed midfield schemer who, as so often when he wore blue, got the engine running.

One Friday night last August, McNab was coaching the kids of Chiefs Futbol Club at Pleasantdale Park in Atlanta when he suffered a stroke. The 60-year-old was rushed to Northside Hospital where his condition worsened, a second more severe stroke requiring him to be airlifted to a better-equipped facility. There, he spent a week fighting for his life.

Of course, when he emerged from intensive care, the battle had only really begun, and his ongoing recovery has been complicated by the prohibitive costs of health care in the USA. At last count, his medical bills had tipped past $150,000.

A GoFundme page was established to help the family defray the costs. As of yesterday, more than $30,000 has been raised in six months, a tidy sum given that most of the donations come in small increments.

While the initial appeal was to the soccer community in Georgia, where he has coached for a number of years, perhaps the most impressive aspect of the tally is how much has come from fans across England who remembered him with fondness from his playing pomp.

“You were one of my favourite City players,” wrote Dave Medley in a typical entry accompanying his contribution. “I remember you running the show in midfield around 85/86, with a string of man-of-the-match games. Get well soon!”

It’s not just City fans either because McNab had a lengthy and peripatetic career. He learned the game on the cobbled streets of Greenock by the banks of the Clyde, where, if he hadn’t shown promise with a ball at his feet, he was destined for a job in the shipbuilding industry.

Having left school at 14, he became the youngest player ever to start for Morton a year later. After just 14 first team appearances, he was bought by Tottenham where, at 16, he came off the bench against Chelsea for his debut at White Hart Lane.

If he never quite lived up to his wunderkind billing, Alan Mullery, who signed him for Brighton, described him as “a Scottish whippet, a fierce competitor in midfield who never stopped competing or running”.

Aside from the Goldstone Ground, Spurs and City, stints at Tranmere Rovers, Huddersfield, Leeds United and Bolton Wanderers yielded over 500 first team appearances. There was even a 13-game cameo in the candystripes of Derry City where, unlike so many superannuated British imports to the League of Ireland, he appears to be fondly remembered.

For all his travels, Manchester City was where he spent the longest, playing 260 games in all competitions. Some supporters reckon he was the club’s player of the 1980s, a consistently bright spark in a decade that was so often dismal.

After retiring in 1993, he returned to Maine Road to work in youth development for four more seasons, his twin sons Joe and Neil jnr enrolling at the club’s centre of excellence and even serving as ball boys on match days. The family has always bled blue and that is what makes one aspect of his current plight so odd.

If every footballer currently on City’s books donated two per cent of their salary next week, McNab’s remaining medical bills would be cleared instantly, and he would have one less battle to fight.

Would Kevin De Bruyne or David Silva notice so minor a deduction? Would they object if Pep Guardiola, he of the selective social conscience, told them the story of the ill-fortune that has befallen one of their predecessors in City’s midfield? You’d hope not.

You’d hope somebody in that outfit knows the club’s history predates the arrival of the oil billions, that there was a penny-pinching fishmonger’s son named Peter Swales before a Sheikh Mansour, a Kippax before Kun Aguero.

Then again, maybe not.

McNab’s stroke was widely reported in the Manchester Evening News last summer. Accounts of the financial issues he’s facing and the fundraising, some of it by former team-mates like David White, have been all over social media.

Surely somebody at the Etihad is aware enough to know that with annual revenue nearing the half a billion pounds mark, it might behove City to make a charitable gesture, to write a six-figure cheque themselves. If there’s nobody left at the club with any institutional memory, not a single person who recalls how many times over McNab repaid his £35,000 transfer free, a scroll through the testimonies of his GoFundme page might help.

Four decades have almost passed since McNab was featured in SHOOT! magazine’s famous Focus On questionnaire. His car was a Vauxhall Viva, his favourite meal was steak and chips, and the best country he’d ever visited was Scotland. A different time. A different profession. A different game. Too many at City seem to want to forget that world ever existed.

1 Seán O’Brien: Anger over my parents’ break-up never left me
2 2020 All-Ireland Senior Hurling Championship key dates
3 Hugo Keenan and Will Connors: The best of friends, the best of debuts
4 All-Ireland SHC 2020: Our writers and pundits make their predictions
5 Ireland get the job done against Italy to keep alive Six Nations hopes
Real news has value SUBSCRIBE
Crossword Get access to over 6,000 interactive crosswords