Kane to undergo a scan amid fears his season is over 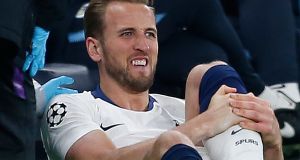 Tottenham Hotspur striker Harry Kane: could be out for the season. Photograph: Ian Kington/AFP

Harry Kane will undergo a scan on Thursday to assess his fifth ankle ligament injury in three seasons and the Tottenham striker fears it will spell the end of his domestic campaign.

Kane suffered the problem in Spurs’s 1-0 Champions League quarter-final first-leg win at home to Manchester City, when he lunged into a bad tackle on Fabian Delph and ended up coming off worse.

The initial impression is that the injury is similar to the one Kane suffered against Manchester United in January which kept him out for six weeks. There are only four-and-a-half weeks of Spurs’s domestic season to go.

The England captain is determined to be back for his country’s appearance at the inaugural Nations League finals in early June; the team face the Netherlands in the semi-final on June 6th before a possible final against Portugal or Switzerland on June 9th. The Champions League final will be played on June 1st.

“Gutted to go off injured but every setback is a chance to come back stronger than ever,” Kane tweeted. “Big finish from the boys to go on and win.”

Kane’s latest injury is to the left ankle; the same one that he damaged against United. The previous three were because of damage to the right ankle. His longest layoff was caused by the first one, which he suffered against Sunderland in September 2016 and after which he was out for seven weeks. Spurs also have concerns over Dele Alli, who was forced off against City with a wrist injury.

Spurs have proved they can cope without Kane, with Son Heung-min – who scored the goal against City in the 78th minute – regularly stepping up with impressive performances. It has not gone unnoticed at the club that when Kane endured his first ankle-enforced absence, Son starred at centre-forward in a 2-0 home win over City in the Premier League.

During Kane’s more recent layoff in January and February, Spurs won all four of their league fixtures plus the Champions League last-16 first leg against Borussia Dortmund. Son scored four goals during that period. The club’s record in all competitions during Kane’s various layoffs reads: W13 D4 L4. Son has contributed a total of nine goals.

“Everyone is counting on Sonny,” Jan Vertonghen, the defender, said. “We’ll have Harry coming back from injury hopefully soon. Everyone needs to step up like we did before. We won all of our Premier League games without Harry [last time] and hopefully we can do it again.”

Vertonghen also commented on VAR, which came into play against City when his teammate Danny Rose was penalised for handball. Sergio Agüero had his penalty saved by Hugo Lloris. Vertonghen fears the system will change the style of Premier League defending, together with the emotion of the game, creating an environment in which players are scared to make physical contact.

“So many things look like a penalty in slow-motion – take the PSG-Manchester United game,” Vertonghen said, making reference to United’s last-gasp VAR penalty following a dubious handball. “I think we have to change the way we defend. We are not pulling people down but even a small touch – if you watch it 20 times in slow motion, it will give so many more penalties.

“We were talking more about defending corners or free-kicks. Before, it was quite physical but in a fair way. Now, you are too scared to get close. We all need to adapt - the players, the referees. It’s important that referees think as football players sometimes. In a way, VAR is good but it takes a lot away from the game.” – Guardian

1 Born to ride, born to win: Sam Bennett, the making of a green machine
2 Leinster look ready to step things up and burn off Saracens challenge
3 Connors now delivering on his massive potential
4 Keith Duggan: Surreal story of John Delaney needs to act as a wake-up call for FAI
5 Let’s face it, Saracens don’t really care that they are rugby’s most hated team
Real news has value SUBSCRIBE
Crossword Get access to over 6,000 interactive crosswords