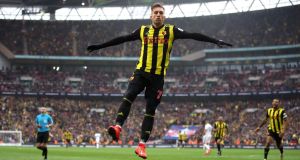 As a manager you know it’s definitely, undoubtedly and incontrovertibly your day when you are faced with one major selection decision, get it demonstrably wrong and then win the game because of it.

Troy Deeney, Watford’s captain and frequently their inspiration, is known for giving occasional sermons about cojones, and once again proved his qualifications for delivering them by rocketing home the 94th-minute penalty that completed his team’s comeback from two goals down.

Gerard Deulofeu, the slight, wispy  Catalan who scored their other two goals, is not so much the chest-thumping, fist-pumping type, but this was the story of the mouse that roared.

As that equaliser went in and his team-mates sprinted towards the corner flag with the scorer, Deulofeu alone took the shortest route towards the Watford fans, leapt upon an advertising hoarding, and he screamed. The match had been saved, and so he set about winning it.

Deulofeu had been rejected here, punished for an ineffective display against Fulham in midweek with a seat on the bench while Andre Gray, who came on at half-time to decide that game in the Hornets’ favour, took his place in the starting line-up.

He watched from the sidelines as Deeney twice carved out wonderful goalscoring opportunities which Gray spurned, and as Wolves took two of their own to take an apparently decisive lead.

With only a little bit of effort this entire period, the 66 minutes that preceded Deulofeu’s arrival, can be seen as little more than an extended motivational exercise, 22 players and a referee running around a pitch in such a way as to massively fire up a single watching Catalan.

Matt Doherty had scored the first in the 36th minute, heading in Diogo Jota’s cross after a short corner. A little under half an hour of playing time later Raul Jimenez doubled his side’s advantage with a VAR-endorsed, borderline offside but indisputably brilliant chest-down-and-volley after a short free-kick.

That, right there, is what £30m buys you. Roared on by thousands of poncho-clad, sombrero-shaded supporters, the Mexican pulled on a novelty mask and celebrated a moment that at the time felt very close to decisive.

The game was being decided around the margins, and it was no coincidence that both goals had come from set pieces. Javi Gracia had told the media pre-match that Roberto Pereyra, like Deulofeu substituted at half-time against Fulham, was struggling for fitness and unable to train. Perhaps he was spending the time when he might have been on the pitch learning an entirely unexpected role in the team.

Having spent the entire season patrolling Watford’s left flank, here he rarely caught sight of the touchline. Instead he prowled the midfield, joining the effort to deny Ruben Neves and Joao Moutinho the time and space in deep areas with which they can be so influential.

When Watford won at Molineux in October a variation on this approach had been considered crucial; here they attempted to use different ingredients to make the same recipe.

It delivered Watford control of possession but Nuno Espirito Santo’s side still seemed the most likely scorers, both from restarts and when the outstanding Diogo Jota took on the Hornets’ rearguard.

But this was not destined to be a straightforward victory. These two teams, separated in the league table by a single point and a goal difference of one, with their varying shades of golden replica kits providing the brightness a thick blanket of ash-grey cloud prevented the sun from delivering, were pulled apart as Wolves took and stretched their lead and then, as if attached by elastic, snapped back together again.

Deulofeu’s first goal, 13 minutes after coming on, was an act of defiance and a thing of beauty, the Catalan collecting the ball in the area after Romain Saiss headed down a Jose Holebas long throw, looking up, assessing his options, deciding none of them amounted to much and then flicking his ankle like a cricketing wrist-spinner to impart dip and curl on the ball and turn a situation from which little seemed possible into a small step towards glory.

He had little to do with the equaliser, Leander Dendoncker catching Deeney in the area to concede the penalty, but 15 minutes into extra time he conjured the winner, exchanging passes with Gray, sprinting past Coady and rolling the ball just beyond the reach of John Ruddy’s right foot.

Wolves, with the substitute Adama Troare frightening his opponents with his pace if not his delivery, could not provide another plot twist, and the day was decided by the gentle, brutal contribution of Watford’s spurned Catalan.