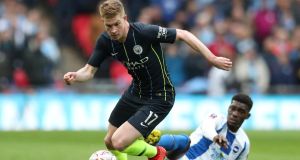 Kevin De Bruyne has rubbished suggestions that Tottenham’s new stadium could influence the outcome of the Champions League quarter-final against Manchester City.

Spurs face City there on Tuesday in their second match at the 62,000-capacity ground, having beaten Crystal Palace 2-0 last week. Would it be an extra incentive for Mauricio Pochettino’s team? Might it affect the atmosphere?

The focus of De Bruyne and his City team-mates on the Tottenham game was apparent after they had secured a place in the FA Cup final by beating Brighton and safely maintained a four-pronged chase for honours. De Bruyne explained that as soon as they were back in the Wembley dressingroom attention turned to the next step of this ambitious campaign.

“It’s about focusing on Tuesday,” he said. “Most of the players have had a massage already to be ready. We know Spurs have had a rest. We have to take every hour we can. Every game from now until the end is going to be like this. Eighty or 90 per cent of the time we’ll have fewer rest days.”

The straight-talking, straight-thinking Belgian believes there is “no point” thinking about the quadruple. “You know how heavy the schedule is? I think people under-estimate how the fixtures come that quickly. You can’t think about it. We don’t even have time to have a rest ourselves, so how can we think about what’s going to happen in four weeks? We’re just going to play Tuesday and hopefully play a good game.”

City are staying in London to minimise disruption at this crucial period of the season. “If you follow us every day, then I think you can appreciate it a little bit because you know all the travel that comes in and the preparations,” De Bruyne said. “It’s what we do, what we like to do and hopefully we can play all the games until the end of the year because it means we’re in all the finals.”

Their run of 22 wins from their past 23 games brings an inherent confidence. “It’s not bad,” De Bruyne mused. “We need to keep going because in the end, if we don’t make it, you guys will say we failed.”

There are, he reckons, no comparisons to last season’s all-English Champions League knockout tie against Liverpool, when City were roundly beaten in the first leg away and never recovered. “Different team, different year, different players. Last year we had a great season. We didn’t make it beyond the quarter-finals and that’s it.”

Although City were not at their most flamboyant during a highly professional job against Brighton, they know they have more gears, and more options, to use against Tottenham. “You can’t play 70 games at your top level,” De Bruyne said. “We’re always disciplined. I don’t know why people would say that defensively we’re not disciplined. I think defensively we do well but, because we play more offensively than other teams, people look at that.”

De Bruyne provided the decisive assist for Gabriel Jesus’s header against Brighton and it gives an insight into the way he thinks about the game that he made sure to whip the ball in at a very specific trajectory. “There’s no point playing that ball high because they’re probably three feet taller than everybody else,” he noted.

Pep Guardiola will assess the fitness of Sergio Agüero and Kyle Walker to give them the best chance of helping the team at the right moment in this intense hunt for maximum trophies.

1 Frustration for Lowry and McIlroy as Li leads at US PGA
2 Juventus sack Maurizio Sarri after European Cup exit
3 Sene Naoupu turning mind back to rugby after health scare
4 ‘Embarrassment, anger, sadness’: the decline of the great Stephen Hendry
5 Rubber about to meet the road as counties weigh up financial hit
Real news has value SUBSCRIBE