Liverpool make hard work of it but eventually see off Burnley

After going 1-0 down, goals from Milner, Firmino and Shaqiri secured three points 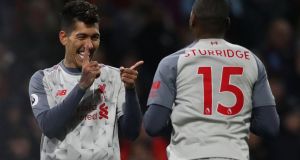 Liverpool kept up their unbeaten record and kept up the pressure on Manchester City by coming from behind to beat Burnley. When the home side took a second-half lead it looked as though they might climb out of the bottom three and leave Liverpool five adrift of the leaders, but two goals in quick succession from James Milner and Roberto Firmino, plus another in stoppage time from Xherdan Shaqiri, rescued the situation.

Jürgen Klopp gave a rare start to Divock Origi after his last-minute heroics in the Merseyside derby, the Belgian just one of seven changes to the Liverpool side that beat Everton at the weekend. That seemed a lot, even allowing for Sadio Mané’s foot injury, though the Liverpool manager said it was par for the course for the busiest stage of the season. Daniel Sturridge started up front, and after both sides had exchanged long-range shots that cleared the bar, the striker had the first glimpse of a chance when Milner’s cross from the left found him unmarked at the far post. Had Sturridge been able to control the ball he would have had a number of options, but he let the pass slide under his foot and out.

At right-back, Joe Gomez needed treatment after colliding with a perimeter fence when Ben Mee halted his run down the wing, eventually departing midway through the first half to cut short Trent Alexander-Arnold’s evening of rest. There was nothing wrong with Mee’s tackle, just a combination of Gomez’s speed of travel, a soaked pitch and Turf Moor’s rather tight confines that sent the Liverpool player crashing into the advertising hoarding.

When his replacement won a corner, Virgil van Dijk met Milner’s cross with a firm header only to direct it straight at Joe Hart. The first period was short on goalmouth action, or even attacking moves of any promise. For all Xherdan Shaqiri’s prompting, Liverpool lacked penetration and any element of surprise without their usual front three. Burnley lacked the ball for the most part, having to make do with only around a quarter of first-half possession, and with Ashley Barnes and Chris Wood failing to find each other when opportunities arose they presented little threat to Liverpool’s goal. Phil Bardsley did connect impressively when shooting from 30 yards just before the interval, though despite the roar from the crowd the ball was always travelling wide.

The home side were always likely to look to score from a set-piece and cruelly, when Barnes had applied a perfect finish to a well-flighted free-kick from Robbie Brady at the end of the first half, his celebrations were cut short by a narrow offside call. Alisson in the Liverpool goal, well beaten as Barnes’ volley flew past him into the net, was the most relieved man in the ground.

Sturridge opened the second half with a shot that Hart had to push round a post before Barnes rolled a tame one straight to Alisson at the other end. Hart was in action again moments later when Naby Keïta struck a fierce shot from the edge of the area, one that was heading for the top corner before the goalkeeper made a one-handed save.

With Liverpool getting on top, it was a surprise when Burnley took the lead just before the hour. James Tarkowski’s weak header from a corner would have been a routine save for Alisson but for Wood’s touch. The goalkeeper could only parry, and when he dived forward to reclaim the ball Barnes got his foot in first, allowing Jack Cork to score from the ricochet. It was the scrappiest of goals and Liverpool complained bitterly that the goalkeeper has been impeded, but after checking with his assistant Stuart Atwell came to the conclusion that no foul had been committed and allowed the score to stand.

Klopp’s response was to ask Mohamed Salah and Firmino to warm up, but before they could be introduced Liverpool were level. Keïta found some space on the left, Origi coolly played a ball backwards out of the area and Milner took a brief look up before clipping a low shot from the edge inside Hart’s left-hand post.

Salah and Firmino did then come on then, and the latter had a goal inside four minutes from what looked like a training-ground move. A short free-kick resulted in a cross to the far post from Alexander-Arnold, where Van Dijk reached it with his foot and turned the ball across the face of goal, leaving the Brazilian a tap-in. Salah missed a couple of chances to make the game safe but still had a hand in the decisive third goal, flicking an instinctive pass for Shaqiri to score with an emphatic first-time finish. – Guardian service