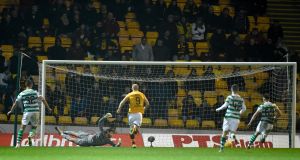 Celtic manager Brendan Rodgers hinted that some players had failed to seize their chance after his much-changed side conceded a late equaliser against Motherwell.

The champions - still with a game in hand - were heading back to the top of the table three days after Rangers leapfrogged them but Danny Johnson’s 88th-minute strike ensured Kilmarnock travel to Parkhead on Saturday as leaders following Aberdeen’s 1-0 win at Ibrox.

Scott McKenna scored what proved to be the only goal of that game after seven minutes as Aberdeen’s Sam Cosgrove and Rangers’ Alfredo Morelos were both sent off for double yellow-card offences.

Celtic opened the scoring at Fir Park in the 13th minute when Ryan Christie took advantage of Motherwell temporarily being down to 10 men, with Liam Donnelly following Peter Hartley in limping off.

Filip Benkovic had a goal ruled out by Kevin Clancy for an infringement and Leigh Griffiths saw a penalty saved by Mark Gillespie as Celtic failed to make their dominance in possession count.

Rodgers made seven changes to his Celtic team, with the likes of Cristian Gamboa coming in and the manager praised Jonny Hayes for his performance, but Olivier Ntcham was hauled off at half-time.

The Celtic boss said: “Not a very good performance. A game that we didn’t play well in — in particular the first-half.

“We scored a good goal and then didn’t take the chance with the penalty and also had a good goal ruled out from Filip Benkovic.

“But still at that stage I wasn’t so happy with our positioning and level of our game.

“In the second half our control of the game and positioning was better but we were still too loose.

“Then of course if you don’t take chances you are vulnerable at the end of the game.

“But from our perspective it’s a poor goal to lose. We didn’t win the first ball, the second, the third and he scores from a very narrow angle. It’s definitely two points dropped.”

When asked if his players took the points for granted, he said: “I don’t think they took it for granted, it was down to concentration.

“And we also had a good goal disallowed and a chance from a penalty. We just made too many mistakes.

“It’s good for a manager to see — because players will knock and ask about why they are not playing and it’s good for me to see a game like that.”

He said: “We lost our captain to a dead leg in the first couple of minutes and when you lose another and they score when you are down to 10 men, you think it’s going to be one of those nights.

“But credit to the boys. Mark’s save keeps us in the game, and give the ball to Danny in the box and he scores goals.”