Ireland under-19s have sights on final despite suspensions 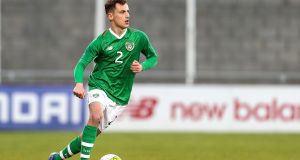 Ireland’s Lee O’Connor is among the players missing for the under-19s European Championship semi-final against Portugal. Photo: Laszlo Geczo/Inpho

Tom Mohan says the Ireland under-19s are anxious to build on their group stage at the European Championships in Armenia by beating Portugal on Wednesday afternoon to reach the title decider. However, the manager will be without two regulars due to suspension and so must make changes in key areas for the tournament semi-final.

Ireland travelled without the likes of Will Ferry, Troy Parrott and Adam Idah, all of whom has scored during the six straight wins that got the team to Yerevan in the first place with several featuring in club first teams through the preseason, and their absence may be felt now as Mohan seeks to replace Jonathan Afolabi in the starting line up.

Also ruled out after having picked up cards in the games against Norway and the Czech Republic is midfielder Lee O’Connor who captained the team in their three group games and played every minute. However, Mohan is in a position to pick an unchanged defence against a Portugal side that has scored eight times in the tournament so far.

“We are fully aware of the threat that Portugal pose,” says Mohan. “They won the tournament last year and we’ve seen their Elite Round qualifiers and their games in Armenia. There is no question that they are one of the strongest teams in this year’s tournament and we will have to produce another massive performance to match them, but this group of players is not fazed by anyone and we have a lot of strengths too.

“One of the most pleasing aspects of this tournament so far has been the courage of the players to get on the ball whilst under pressure and adapt to playing against the different styles and systems of our opponents.

“Barry Coffey epitomised that by coming off the bench against Czech Republic and not only scoring the winning goal but contributing to the team performance and helping to execute our game-plan. The strength of our squad has been hugely important as everyone is making a valuable contribution.

“We feel that we are ready for this game. The players have already done magnificently to reach this stage, but we want to go one better and get to the final now.”

Celtic’s Coffey will be a strong contender to start in midfield this time while Matt Everitt and Festy Ebosele, of Brighton and Derby respectively, will be hoping to feature in a reshaped attack.

1 Gerry Thornley: Ireland don’t want to box themselves into a corner
2 Kevin McStay: Maybe a knockout All-Ireland Championship is the long-term solution?
3 The Offload: Ireland are stuck in no man’s land
4 New Killarney athletic track another jewel in the Kingdom’s crown
5 Fernandes on the double as Manchester United get their revenge
Real news has value SUBSCRIBE
Crossword Get access to over 6,000 interactive crosswords