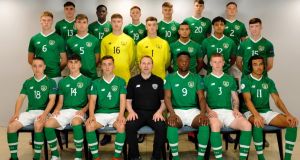 The Ireland under-19 squad set to take on Portugal in the European Championship semi-finals. Photo: FAI

A mainstay of the under-19 team, Maher recorded three clean sheets in qualifying and never conceded more than one goal in any of the other games. The Dubliner is quick to use the ball when at his feet, agile on his line, and a solid shot-stopper.

A double-winning captain of Bohemians under-19s, this Naas native has since been promoted to the club’s first-team squad. He has played a key part in Ireland qualifying for this tournament with a number of accomplished displays at right-back.

This is Ledwidge’s third successive European Championships having featured for Colin O’Brien’s Under-17s in Croatia and England over the last two years. The left-back is strong defensively and possesses the ability to execute long-range passes or crosses from deep.

Returning to the under-19 squad having featured for Stephen Kenny’s under-21s, O’Connor is one of the most experienced Ireland underage internationals of all time as the versatile player is closing in on his 55th cap. The Waterford native is the team captain but will miss the Portugal clash due to suspension.

There are a lot of similarities between McEntee and current Ireland senior international Shane Duffy as they are big, commanding centre-backs who like to build play from the back, but truly like nothing better than winning aerial battles.

Hailing from London, MmGuinness qualifies through his Derry-born father and has been lucky enough to play for his boyhood club, Arsenal, all the way up to their under-23 team. A giant defender who reads the game well, he has returned from a long-term injury and looks sharp again.

After originally breaking into the SSE Airtricity League underage set-up with Shelbourne, Ali joined Bohemians and quickly excelled. The German-born forward, whose father is Algerian and mother is Irish, benefitted from time spent on the FAI-ETB course and is at his best when running at opposition defenders.

The final player to be added to the squad, Morahan had to make the long trip to Armenia on his own and has yet to appear at this tournament. The Leitrim native is a hard-working midfielder who covers the ground with ease.

Powerful and precise, Afolabi is a forward in the same mould as former Netherlands frontman Patrick Kluivert. Having recently left Southampton, he wants to keep up his good record of scoring at this level and he did indeed net in the group stages. However, like O’Connor, he sits out the game against Portugal through suspension.

The new kid on the block, Everitt caught the eye earlier this summer with the under-17s as he produced a man-of-the-match performance in the 1-1 draw with Greece. He qualifies through his grandmother, Theresa, from Cork.

Similar to Kameron Ledwidge, Wright is playing in his third straight Euros. Hailing from Ovens, Cork – the same hometown as Liam Miller – the tricky attacker has improved year on year since being involved in the FAI Emerging Talent Programme in Blarney and joining Aston Villa. He is a natural wide player who likes to take on full-backs.

Omobamidele shot to prominence somewhat when he scored for the under-17s in the Euros earlier this summer. The athletic defender will rarely been beaten in a foot race while his range of passing and tackling marks him out as a serious talent.

Most recently with Luton Town, James is someone who can play across the backline or in midfield but is probably most comfortable at full-back. Eligible through his grandfather John, who was a Kilkenny man, this tough-tackling player brings a lot to the squad and is a fierce competitor.

Comfortable on the ball, Coffey likes to play with his head up and scan the pitch searching for the perfect pass. The Tipperary native is also quick to close down opponents when chasing possession and he is not afraid to get forward to join counter attacks. Indeed he netted the goal against Czech Republic which saw Ireland into the semi-finals.

As if by magic, Conor has this incredible knack of breaking free from tight situations with the ball still at his feet. The close control and technical ability allow him to make a big difference in midfield, where he almost ghosts across the grass with his style of running. An excellent connector of play.

With grandparents from Monaghan, McMahon answered Ireland’s call to rival Brian Maher for the goalkeeping position. The Hull native is a big presence between the posts, quick off his line, and capable of pulling off important saves if called upon to do so.

A tricky winger who terrifies opposition defenders with his lethal combination of speed, skill & strength, Ebosele has come a long way from first playing in the SportsDirect FAI Summer Soccer Schools camp in Enniscorthy. He featured in the under-17s Euros this year and received an early call-up for the under-19s for the Elite Round qualifiers.

A supreme passer of the ball, Hodge is always looking to either receive the ball or move it on. He qualifies through his Dublin-born grandmother Bernadette and also played in this year’s under-17s Euros. He’s made an impression already in this tournament as well by netting in the elite round.

At his best when drifting in between the lines, Kavanagh is a player who likes to make things happen. He craves having the ball at his feet, where he can either take a player on, slide a pass through that splits a defence, or unload from distance with one of his powerful strikes.

A tall defender who can operate at full-back or centre-back, Brennan is quick to close space and to react to any potential danger. The Sheffield lad qualifies through his Limerick-born grandparents and has impressed in training with the under-19s.

Republic of Ireland under-19 Staff