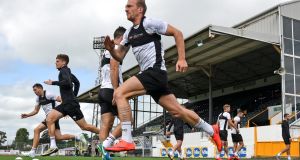 Dundalk players at a training session ahead of their Champions League qualifying clash with Qarabag. Photo: Ciaran Culligan /Inpho

Qarabag are as good as any side Dundalk have faced in recent years according to Vinny Perth but the Irish side’s manager is backing his players to score goals in Wednesday’s first leg at Oriel Park against opponents he feels will look to win themselves.

“They’ll be very attack minded because they are good enough to be attack minded,” says Perth of the Azerbaijani champions who have dominated their domestic league in recent years and played group stage football in Europe for the last five seasons straight.

“They are a better side than Riga and they’ll come here looking to score an away goal,” he says. “We have to respect how good they are but we have to believe too in our forward players and believe that when we have the ball we can create something.

“We’ve done a lot of work on the defensive side of things over the past week and keeping a clean sheet would be massive because of the pressure it would put on them knowing that if we score over there it would count double but there should be a lot of open space in this game and in those circumstances, I back our attacking players.”

Michael Duffy returns after becoming a father while the team was getting through the first round last week and the Derryman is all but certain to start again with Jamie McGrath perhaps the most obvious candidate to drop to the bench although it could be John Mountney or Robbie Benson who makes way.

The visitors made slightly harder going of getting past Parizani Tirana than might have been expected in the last round but they did win 2-0 in the end and having been out of season prior to that they should be a little less rusty now that they have a competitive games under their belts.

With a lot of oil money behind them, they have assembled a talented group from across Europe, Africa and South America and will certainly start the ties as favourites to go through.

Pat Hoban, who will captain the hosts, insists Dundalk will not simply look to defend, though.

“Two years ago they were drawing with Atletico Madrid in the Champions league so we know how good they are but that does not mean we are just going to sit in, no way,” he says.

“We are going to try to attack them as well and hopefully we can come out with a result.”