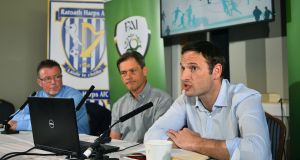 FAI general manager, Noel Mooney, has not ruled out the prospect of seeking to succeed John Delaney as chief executive of the association, a move that would inevitably cause further tensions with the government and Sport Ireland.

Speaking at an event at Ratoath Harps FC, where the association revealed the contents of a Uefa-backed study that puts the value of participation in organised football at more than €1.1 billion per annum, the 43-year-old said it was “highly unlikely” that he would apply for the job because of all the controversy that currently surrounds it but admitted he is hugely enjoying his interim spell in the role and seemed open to the possibility of staying on if the situation became more favourable.

“If you asked me today at the end of July with all the noise that is out there, with all of the commentary, then I’m not sure that I would even apply for it; that’s the truth,” said the Limerick man who said that the negative reaction to his temporary appointment has been unfair.

“I have a job in Uefa that is probably that is arguably the best job in the world. It’s going around Europe working with different federations. I love that role; I look forward in many ways going back to it.

“But part of me absolutely loves being here,” he continued. “When I wake up every morning, even with the challenges that we face and some of it is tough stuff and it’s a hard slog, I absolutely love it.

“That’s every minute of it, even the difficult moments, whatever it is, every moment I love. There is part of me that would like to move back to Ireland but I would say it is extremely unlikely that I will apply for the role.”

Mooney has made a point more than once of distancing himself from Delaney who, he maintains, he was not actually close to but he continues to be regarded as “an insider” by Shane Ross who once again at the weekend cited his appointment to the head of administration role in Abbotstown as firm evidence of association’s reluctance to embrace wholesale change.

Despite the Minister’s objections, though, there appears to be no question whatsoever of Mooney departing before the planned six month stint is up with the former Shamrock Rovers and Cork City goalkeeper talking here about various aspects of what he hopes to achieve during that time.

Amid reports over the previous 24 hours that redundancies seem likely at the association, Mooney insisted that there is not yet any clarity on the issue, although like Donal Conway on Saturday evening, he did nothing to dismiss the notion.

“I saw some stuff in the media today coming from Donal’s interview recently,” he said. “It’s understandable that people would talk about that but it’s just too early really. We are working with our various stakeholders to see what funds are available and we don’t know the answer to that so it’s weird to talk about redundancies when we don’t know the whole picture yet.

“As Donal said, I think that picture will emerge over the next three to four weeks. There may actually be some areas where we bring people in to grow areas. We have to look at our core purposes. What is our objective? It seems that there are some areas where we chased funding because there was funding available but at the same time stepped away from what some of our core purpose of our football association may have been (and) I think it’s important to build a strategy for the future.”

Siptu yesterday condemned what it described as Conway’s “casual threat,” to the livelihoods of its members at the association, but it is a somewhat unfair characterisation of his response to a question about the possibility of redundancies, a prospect he simply failed to rule out while suggesting that the association needs to “build a sustainable financial model”. The reply was generally taken as an indication that they are indeed very much a possibility by the members of the media who were present.

Mooney, meanwhile, referred to “the culture” that existed with the FAI only last year when asked about reports that the association’s head of security, Joe McGlue, had suggested in an email to Delaney ahead of December’s Euro 2020 qualification draw that the Gardai were attempting to “hack” the WhatsApp account of some fans who were thought to be planning a protest.

“I read the piece on Sunday morning,” he said. “I did ask about it. I think it was a misfortunate use of the word ‘hack’. We have to look at ourselves internally and we will. It is something we’ll have to follow up on. I could say it was possibly the culture that may have been there. But I don’t know that for a fact. I wasn’t there.”