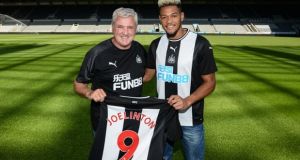 Joelinton poses for a photograph with Steve Bruce after signing a six-year contract at Newcastle. Photograph: Serena Taylor/Newcastle United via Getty Images

Newcastle United have announced the signing of Hoffenheim striker Joelinton for a club-record fee, believed to be in the region of £40m (€45m).

“I’m really happy to be here,” Joelinton told the club’s official website after signing a six-year deal. “I know it’s a large investment that the club has made in me, and that comes with a huge responsibility. I’m highly motivated and hope to give back on the pitch.”

The 22-year-old Brazilian forward has been handed the No 9 shirt and signs a six-year deal, leaving the Bundesliga after four years – two of those spent on loan at Rapid Vienna.

“The kid’s got an exciting time ahead of him,” Steve Bruce, the Newcastle manager, said. “He’s a smashing young player and we’re obviously delighted to get him.

“It’s been going on for a little bit now, so to get him is great for everybody,” Bruce added. “He’s got everything that a modern-day player wants. He’s big, strong and athletic, and of course he’s got age on his side too which is vitally important.

“He’s learned the history and wanted [the No 9 shirt] ... in his eyes, it was ‘bring it on – it’s what I’m here for’. I’m sure he will be a big favourite of the supporters. He’s got an incredible work rate, he’s got a really good humility about him, and all the attributes a top striker needs.”

Joelinton is the first arrival of a turbulent summer that has seen former manager Rafael Benítez leave after his contract was not renewed. The club have confirmed that the fee is a club record, exceeding the £21m (€23.5m) paid for Miguel Almirón in January. – Guardian