World Cup: Norway waltz on after beating Matildas on penalties 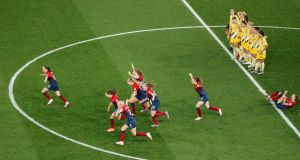 Norway beat Australia 4-1 on penalties to reach the women’s World Cup quarter-finals for the first time since 2007 following a highly-entertaining 1-1 draw after extra time on Saturday.

Norway’s Isabell Herlovsen opened the scoring shortly after the half hour but Elise Kellond-Knight’s direct corner seven minutes from time sent the game into extra time - during which Australia’s Alanna Kennedy was sent off.

Australia missed their first two spot-kicks in the shootout and Ingrid Syrstad Engen buried the winning penalty to send Norway through.

They will face either England or Cameroon for a place in the last four.

“I’m really content with how we handled all this pressure and stress,” Norway coach Martin Sjogren told a news conference.

Australia coach Ante Milicic was understandably devastated for his team.

“I don’t know if there are any words to describe how I’m feeling but, more importantly, how the girls are feeling,” he said.

Australia set a high tempo from the start and went close in the opening minute when Sam Kerr collected a through ball from Caitlin Foord and fired just wide.

But it was Norway who found the back of the net first as Karina Saevik played Herlovsen in and the striker finished clinically in the 31st minute.

There had to be VAR action and it happened five minutes from the interval when a ball bounced off Maria Thorisdottir’s shoulder and referee Riem Hussein awarded Australia a penalty - a decision that was overturned after a three-minute VAR review.

For all their slick passing, the Matildas proved quite toothless in the area, having managed only a single shot on target by the hour mark.

But Kellond-Knight sent a corner straight into the far corner of the net with seven minutes left, only her second goal in 110 appearances for her country, to send the game to extra time.

Caroline Graham Hansen’s fierce shot was tipped over the bar by Australia keeper Lydia Williams in the 99th as both teams attacked relentlessly and Kennedy was shown a straight red card for bringing down Lisa-Marie Utland as she rushed towards goal.

Kerr and Emily Gielnik missed the first two attempts and Norway kept cool heads to book their place in the last eight.