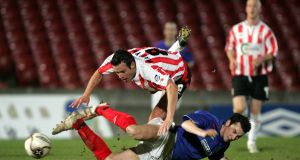 The man behind the proposal to form a new 14-team All-Island Premier Division says he hopes to meet Uefa and other stakeholders over the coming months and to get the venture’s funding in place by October. After that the intention is to put a firm proposal to clubs from both sides of the Border.

Tech entrepreneur Kieran Lucid is hopeful Uefa will be enthusiastic enough about the potentially historic project to show flexibility where places in their club competitions are concerned and he is confident he can generate the sort of revenue that would finally persuade clubs across Ireland that they are better off together than apart.

This weekend, the 35-year-old will be at the football competition he already runs, the Boyne Cup, a cross-community tournament for 12-year-olds from all over Ireland. It is a modest enough starting point for someone who wants to completely redraw the Irish club game’s map.

He has been working on his plan for an all-island league since last 2017 and last year employed Mark Duffy, recently elected an Independent councillor, to work full-time on the project with him. Along the way, he has also assembled a working group that includes Brian Kerr, Brendan Dillon and Ciarán Medlar, all well-known figures in the southern game as well as former Glentoran director Stafford Reynolds and Catherine Toolan, the chief executive of the International Convention Centre in Belfast.

Their intention is to lay the groundwork for a league that the clubs themselves will own. Prize money will be hugely increased over what is currently on offer and participants will be obliged to spend a significant portion of it on marketing and facilities.

Using a three-pronged model closely modelled on the one used by the Premier League in England, clubs would get a basic share of revenues, prize money based on league placing and a fee for televised games. Based on total annual revenues of €10 million, a figure Lucid firmly believes can be achieved, the winners would get about €800,000 with the last-placed team in the top flight picking up just short of €370,000. The club to come out on top of the second tier would get €144,000, €34,000 more than Dundalk got for winning the Premier Division last season while the last-placed side would get €66,000, more than Cork City received for finishing second.

The money would be generated from a fairly standard variety of sources. The two associations would be expected to chip in with about €2 million between them, a significant increase, while the backing of a major title sponsor would be key.

“We haven’t started talking to people about this aspect yet,” he says, “as there is a lot of ‘chicken and egg’ about the whole situation but I think the attraction of lending your name to a league that brings together clubs from North and South here is obvious.”

The marketing of data to the companies who provide it to bookmakers and media companies also has the potential to bring in significant funds, he says, with the Scottish league’s annual take on this front having just increased by €1.35 million. He has met two of the big international firms, both of whom have indicated a willingness to do business, and there will be TV money.

“I have only spoken to one broadcaster so far but they made a seven-figure offer to broadcast it.”

There is still, he admits, quite a long way to go but having made it this far, he certainly seems confident that the group can complete the journey by achieving the funding required to win the clubs over.

“I can’t name the clubs we have spoken to and none want any indication given of what they have said but I’d say the general consensus can be characterised as: If it makes sense financially for them then that will ultimately drive their decision.”

He is hoping that they reach it well before the end of this year as both leagues would have to start altering their season in 2020 if the desired start date of 2021, something he describes as “ambitious but not impossible” is to be achieved.

The long-term intention would be to start the season in April and finish it on New Year’s Day with the “Boxing Day” programme an important factor for the northern clubs.

The initial balance in the top flight, eight from Airtricity League, five from the NIFL Premiership and one other to be decided by a play-off would shift over time with three teams promoted and relegated each season. The second tier, or Championship, would be split in two along geographical lines but the line-up would not be based on which association a club is affiliated to. Finn Harps would, for instance, play in a northern section likely to contain more clubs from Northern Ireland than the Republic.

The top flight would consist of two rounds of 13 games after which there would be play-offs for European places and relegation. The Championship would involve clubs playing each of the other nine sides in their section twice and all 10 in the other once. There would be also be a League Cup competition but the respective associations would continue to organise the FAI and Irish Cups as at present.

The ownership model would be broadly based on the English Premier League too with each top flight club having four shares and each Championship side one. The two associations would have preference shares conferring certain rights and the ability to veto decisions in specified areas.

While the intention is to very substantially improve on the revenues the two leagues generate between them now there will, he says, be a huge focus on marketing and ground standards: “We want them to be places that people want to spend time with their families,” he says. “The last thing we want to do here is to trigger an arms race for players because that is the worst way to spend money.

In terms of facilities, he says, “we will start low; no club would find them impossible to achieve in the first year but the minimum required will go up after that and they will be strictly enforced.”

Kerr and Dillon both speak hugely positively of Lucid and the project with the latter describing the work he has done to date as “phenomenal”. Fintan Drury attempted something similar in 2007 but the scheme was opposed by then FAI chief executive John Delaney, something that contributed to its demise. It is hoped that his departure may make the decision-making process now a little more merit based.

Representatives of the group have met Niall Quinn’s consortium after Kerr suggested it would be a good idea but neither party seems to have had much enthusiasm for teaming up and working together.

Lucid insists he will not have any stake in his venture if it goes ahead or seek to run it. “I subscribe to a variation of the Peter Principle [the idea that people in big organisations tend to be promoted until they are installed in a job they are useless at] . . . I don’t believe that a guy with a laptop who has a really good idea would be good running a football league. I’d be very proud if it happens but I’m pretty sure I would be terrible at running it, I don’t have the skillset at all.”

He remains convinced that he just might get it going, though, and is keen, he says, to hear from those who share his enthusiasm at info@allislandleague.com.