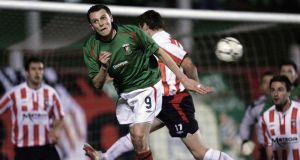 After 18 months working behind the scenes on the project, Dublin-based entrepreneur Kieran Lucid is to brief a meeting of Airtricity League clubs in Abbotstown on his proposal for an “All Island League”.

Lucid, a data analyst from Kerry, who sold Quantum KDB, the tech firm he founded in 2011, for €2.9 million in 2016, has had little previous involvement in football but has put together a plan for a 34-club, two-tier league he hopes might be up and running by mid-2021.

The hope is to create an entity that generates more than €10 million annually, something that would have the potential to utterly transform senior club football on both sides of the Border. Those working with him on the project include former Republic of Ireland manager Brian Kerr, Brendan Dillon, the Dublin solicitor who was previously the chairman of the League of Ireland and a member of the FAI board as well as Ciarán Medlar, a partner and tax specialist with accountancy firm BDO who has worked closely with members of the Republic’s senior team in recent years.

Fintan Drury, of football agency Platinum One, who previously explored the possibility of establishing a single Irish league more than a decade ago has also provided advice.

Although this will be the first formal presentation of the plan, Lucid has, he says, met with all but a handful of the likely participants. The response, he suggests, has been generally positive with clubs clearly attracted, he acknowledges, by the sums of money being mentioned.

A good deal of the structural side of his proposal is in place but Lucid is still working on the financial side of things. The intention had been to continue the process behind the scenes until the autumn then unveil a more complete plan but he has been forced to an extent, he says, to go public after being named publicly by Noel Mooney.

“Noel has been very polite in our dealings with him,” he says, “but we were surprised, after having gone to so much trouble to keep this out of the media, that it was publicised by the CEO of the FAI.”

Mooney spoke at a League of Ireland-related public event on Monday evening when he mentioned Lucid and his proposal. The FAI’s interim head of football said that he would be happy to discuss any plan for a merged league.

Lucid’s plan, many aspects of which are very detailed, involves the establishment of a new Premier Division which would comprise 14 clubs and two, regionalised, Championships of 10 clubs each. The initial make up, he suggests, would be the top eight teams in the previous season’s Airtricity League, the top five from the Northern Irish Football League Premiership and the winners of a play-off between the First Division champions in the South and the sixth-placed side in the North.

Membership of the two championship divisions would be based on geography but not on which association the clubs are affiliated to. The new entity would also run a cross-Border league cup competition but the FAI and Irish Cups would continue to exist in their current forms.

The intention is that the league would be wholly owned by the clubs, with the structure envisaged closely modelled on the Premier League in England, and backed by the two associations.

Asked if he believes revenues of €10 million are really feasible, he says: “Absolutely. We are not promising it and the presentations to clubs have been based on a lower figure as we wanted to be conservative but we are working to produce a figure north of that.”