Walters hopes to return to action before end of season

Ipswich striker pushing himself for early comeback despite uncertainty over future 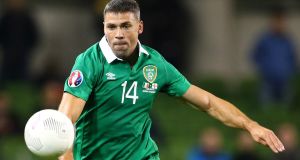 Jon Walters has scored 14 goals in 54 appearances since making his senior debut for Ireland in 2010. Photograph: Cathal Noonan/Inpho

Republic of Ireland international Jon Walters is hoping to have recovered before the end of this season from the Achilles injury he suffered in late September, but he is unsure about his future at either club or international level after what would be more than six months out.

The 35-year-old ruptured his Achilles after coming on as a substitute for Ipswich in a Championship game against Bolton. It was his third appearance for the club after returning there on loan from Burnley, where he is now back working tirelessly to get back playing again.

“I’m doing a lot of strength work, hundreds and hundreds of reps, and out running,” says the striker, who is a couple of weeks into a nine-week programme intended to cover the final phase of his rehabilitation.

“The aim is to make sure that the power is the same in both legs. It’s a long slog, and the particular stage I’m at at the moment is pretty tough, but after that it should be less. The next thing is to do multi-directional work and I’ll just have to see what it brings after that.”

Walters says he might be a week or two ahead of schedule right now, which could mean he would be available to Burnley boss Sean Dyche a month or slightly more before the end of the league season. However, he is not getting carried away about his prospects of a return to first-team action at that stage, given his previous injury problems, the fact that he had already been on the margins of the squad and the potential for a setback during the coming weeks.

“Burnley have been great and I’m doing everything I can to make sure I’m in the best condition possible,” he says. “I’m doing far and above what people normally do. My body fat is lower than it was when I was playing; my weight is good. I’m there or thereabouts.

“Normally when you are injured, you tend to put a bit of weight on, get a bit out of shape, lose muscle in the legs or whatever, but I’m the opposite really; I’m in really good shape. I’m doing everything that I can, but I’m under no illusions. It just depends how you come back and that is hard to call because it’s such a serious one and obviously my age is an issue too.

“I haven’t played a lot in the last two years. I had an operate on the knee, came back from that but didn’t play a lot, then did this. You end up having scar tissue on scar tissue. I’ll just have to see how it heals.”

Walters did feature once for the club in a Europa League game but he says his preparations for the new season were badly hit back in July by the death of his brother James, who was just 35, and a couple of other very significant events in his personal life.

“I write everything down that I do, every set and every repetition, and I only took four or five days off so I came back and I was in good shape. I did every pre-season session, felt great, but still sort of knew I wasn’t going to play. For a while, though, I had a lot going on and that’s where my head was, but I did get some game time, played in the Europa League out in Turkey, then came back and didn’t play in the home leg, so the writing was on the wall. So the idea then was to go on loan.”

He decided on Ipswich, he says, because the club’s owner, Marcus Evans, called him to make it clear he was wanted and he still had friends there, but the injury then cut the loan spell short.

He admits to being unsure now as to where he might be playing next season – his contract at Burnley is up in the summer – assuming he does make a full recovery from the injury, but insists he is keen to continue playing, mentioning that he is keen for his “football-mad” seven-year-old son, Ely, to get to see him as much as possible. Featuring again for Ireland, he insists, also remains an important ambition.

“It has been the ultimate thing for me really,” he says of an international career that has included 14 goals in 54 appearances since his senior debut in November 2010, “so it is the driving force in all of this, I think it’s fair to say”.

He has yet to speak with Mick McCarthy, he says, because of the uncertainty about his injury, but mentions the possibility of coming to Dublin while the squad is there ahead of the opening European Championship qualifying game in Gibraltar.

“I know I’m not fit now, but I do need to speak to him,” he says. “I know the squad will be together next month so it would be nice to maybe go in and just see people.”