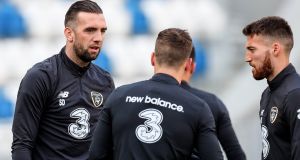 Shane Duffy: set to return in central defence for the Republic of Ireland against Georgia in Tbilisi. Photograph: Ryan Byrne/Inpho

News of of Shane Duffy’s return may have added slightly to the need Mick McCarthy felt at his pre-match conference to do some dampening of expectations but there is an inescapable sense that failing to beat Georgia in Tbilisi in Saturday would be a severe setback for his Ireland side as they head from this into games against their two real rivals for qualification.

Denmark’s draw here last month means that an Irish victory would leave Ireland requiring either one win or two draws from those final couple of group games.

It is tempting to say ‘only’ but both are more than capable of inflicting defeats on McCarthy’s side.

Georgia, on the other hand, might need just a little encouragement from their visitors tonight if they take another point, or even three, from a campaign which has already become an elaborate process of preparation for the Nations League play-offs in the spring.

They got plenty of encouragement when Ireland were here two years ago. Martin O’Neill spoke before the World Cup qualifier in September, 2017 about the need for his players to keep the ball and use it to better effect.

On the night, they had 26 per cent possession and were outpassed by a margin of nearly three to one. You can scarcely complain about only taking home a point after a night like that.

The Danes in Georgia had the ball for 60 per cent but managed no more shots on target in their scoreless draw here than Ireland had and could well have conceded in the closing minutes.

The result was a gift to McCarthy but one that comes with strings attached. Georgia may well feel more confident off the back of it, Ireland more wary of their hosts and both managers acknowledged that the visiting side’s far greater need of all three may prove to be a factor over the course of the night.

Ireland, though have to be better than they were here two years, significantly so, and if they are then it would be a major disappointment not to win because if they don’t, they will most likely have to be much better than that again to complete the job of qualifying in these groups stages.

Duffy will, in any case, start. McCarthy confirmed that and he hinted strongly that James Collins will lead the attacking line, something that would almost certainly mean that Aaron Connolly will start the evening on the bench.

Matt Doherty sounded like rather less of a certainly for the left back slot after the manager had said how impressed he has been with Derrick Williams this week but being passed over again would be quite a blow to deliver to the Wolves defender.

The only other unenforced change that seems even vaguely plausible would be bringing in Josh Cullen for Glenn Whelan but if McCarthy believes that the Dubliner can get through both games in such a short space of time that that is likely to be the way he goes despite the younger man’s performance against Bulgaria a month ago.

Assuming he does start, it will be a big night for Collins although McCarthy seemed to have absolutely no qualms about the Luton Town striker’s ability to cope.

“Why would I not?” he said when asked whether he trusts a player who has made just one senior international appearance from the bench, that friendly again, against Bulgaria, in which he scored.

“It’s not only just seeing him the half an hour of international football where I thought he was excellent actually. It’s when he comes and trains with the lads and he doesn’t look out of place. He’s fitted in and he looks every bit the international player with us. So, I trust the lads. There’s no point having them in the squad if I don’t.”

Georgia boss Vladimir Weiss, who knows a thing or two about taking points from Ireland having been in charge of Slovakia for the two draws 10 years or so ago, and here when O’Neill side allowed an early lead to slip, delighted the visiting press corps by suggesting McCarthy’s side plays like Michael Flatley dances, a comment that has no doubt given rise to a fair few colourful back pages.

They are, he said, “a phenomenal team” who play with “unbelievable passion,” and though his opposite number was quite pleased by the comparison, he did note that Weiss was not suggesting his players had quick feet and are good with the ball.

“Duffy coming back is not good news for us,” he acknowledged, remembering the central defender’s early goal here two years ago.

“I wish him luck and good health but I hope that he doesn’t score a goal from one of the Irish set-pieces. He is a very important player from them for his team”.

For all McCarthy’s talk of his players needing to keep the ball and use it more effectively that will, most likely, be an important factor for the visitors. Connolly could be another with the 19-year-old providing a very welcome option. The friendly game a few years aside, though, only one of the 10 games against Georgia has been won by more than one goal and it would a surprise if this one is not very tight too.

Another narrow victory would do rather nicely, however, while even a draw seems certain to feel an awful lot like a defeat this time.