Lampard’s side had given up early advantage after Abraham goal 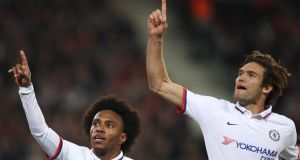 For long spells it seemed that this was going to be another tale of frustration for Chelsea, another night when Frank Lampard’s young players would be undermined by their habit of following every step in the right direction with a costly stumble. They had thrown away another lead, fashioned by Tammy Abraham’s eighth goal of the season, and were being pushed to the limit by Lille.

Yet the mood changed entirely when Willian’s deflected effort fizzed into the net with 13 minutes left. Chelsea had not been threatening to score a second goal but they were on their way to their third consecutive win under Lampard and had bounced back in style after losing their opening Champions League match, lifting them level with second-placed Valencia in Group H.

This promised to be a stern test of character for Chelsea’s youngsters, all of whom were getting their first taste of playing away in Europe. The roof was on, the home fans roared whenever Lille attacked and Lampard’s side made a careful start, controlling the tempo in midfield and not committing too many men forward.

It felt like a deliberate ploy, a way of killing the noise in the stands, and Christophe Galtier’s young side found it hard to get into their stride at first and test Chelsea’s frailties at the back.

It also helped that Lampard had reverted to a 3-4-2-1 system, a switch that gave Chelsea the early edge. They looked slick and composed on the ball and they always seemed to have an extra man in the middle, with Mason Mount drifting inside from the left to help Jorginho and N’Golo Kante outnumber Benjamin Andre and Boubakary Soumare.

Lille could have few complaints when they fell behind in the 22nd minute, Fikayo Tomori sauntering forward from the back and catching them out with a clever pass that found Abraham in acres of space in the area. Played a yard onside by Reinildo Mandava, Lille’s left back, the striker celebrated his 22nd birthday by turning and placing an easy shot into the left corner.

Yet Lille had seen weaknesses in Chelsea’s defending when Kurt Zouma’s errant backpass forced Kepa Arrizabalaga to race from his line and head away from Victor Osimhen while it was still goalless. Undeterred, the hosts shook their heads clear and almost levelled when Tomori gave Luiz Araujo too much room to jink inside from the right and test Arrizabalaga with a bending shot towards the far corner.

Lille soon had the ball in the Chelsea net, and in truth it was a dreadful goal to concede. Jonathan Bamba swung in a corner from the left, Zouma misjudged the flight of the ball and Osimhen capitalised on slack marking by planting a low header beyond Arrizabalaga in the 33rd minute.

Chelsea’s inexperience began to show, even if they were close to regaining their lead when Jorginho whipped a shot just wide from 25 yards moments before half-time. There had been a huge show of confidence from Lampard for Reece James, whose second appearance for Chelsea came a week after his goalscoring debut in last week’s Carabao Cup win over Grimsby Town, but Lille were quick to run at the young right back. James would be booked before the interval for a lunge on Jonathan Ikone.

There were more difficult moments for Chelsea at the start of the second half. Their defending at set pieces has left much to be desired this season and they were fortunate not to trail when Andre glanced a header goalwards. Arrizabalaga, diving to his right to tip the ball wide, was entitled to wonder where the marking was again.

Chelsea, whose starting 11 contained four academy graduates, needed to summon more composure and quality. Mount was having a quiet game by his standards. The service to Abraham had fallen below expectations and Christian Pulisic, the £58 million summer signing from Borussia Dortmund, must have felt aggrieved at failing to make the bench when he looked at Willian’s failure to fashion openings on the right.

There was also no place in the 18 for Ross Barkley, who had been forced to apologise for rowing with a taxi driver during a night out in Liverpool on Sunday, and Lampard grew exasperated as Chelsea huffed and puffed in the final third. The only surprise was that he waited until the 67th minute to make an attacking change, replacing James with Callum Hudson-Odoi.

The introduction of the 18-year-old winger led to an improvement and Chelsea went close when Mount saw a rare shot pushed wide by Mike Maignan.

With 13 minutes remaining Hudson-Odoi ran at Lille on the left and lifted a deep cross to the far post, where Willian’s volley clipped Mandava and deceived Maignan. Inevitably, Chelsea almost blew it again when Tomori’s mistake let in Osimhen. This time, however, Arrizabalaga dived at the striker’s feet and the points were safe. – Guardian