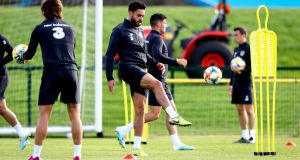 Defender Derrick Williams has expressed sympathy for former Republic of Ireland assistant manager Kevin MacDonald, who lost his coaching at job at Aston Villa a couple of months ago after an investigation into allegations of bullying made by former international Gareth Farrelly.

Williams, currently with the Ireland squad in Tbilisi, where he is hoping to earn his second senior cap on Saturday, spent four years at the club, where MacDonald was a key member of the youth development set-up. He was one of a number of young Irish players there around that time, with Graham Burke, Danny Devine and Mikey Drennan all part of what was a well-regarded development set-up.

Having played there himself under MacDonald in the mid-1990s, however, Farrelly claimed, in an interview with the Guardian, that there was “a culture of verbal and physical bullying”, one that had sent him to “extremely dark places”. The club launched an investigation and the Dubliner’s claims were supported by a number of others who had spent time in the set-up .

Williams, though, expresses sympathy for MacDonald, who left in August after having been suspended last December, and says that he never felt as though he was being bullied.

“Kevin Mac was brilliant for me,” says the 26-year-old from Tramore, who ultimately turned down the offer of a new deal from the club in order to pursue first team football at Bristol City before joining Blackburn Rovers, where he has been playing particularly well this season.

If you did something that was wrong, they’d tell you. I thought that was perfect for me

“Him and Tony McAndrew [a coaching colleague of the Scot, who has also left Villa since then], I owed them a lot because of not only the player I am but the man I am today. They were really good. I enjoyed playing for them both. I was a bit gutted for them.

“They were,” he says, “a bit ‘old school’. But I wouldn’t say it was bullying. If you did something that was wrong, they’d tell you. I thought that was perfect for me. And that made my step to leave easier because when I went to first team football and someone gave me a bollocking, I was used to it. You know it’s never personal. They got me ready for first team football, that’s what they are there for.”

In the statement that followed the conclusion of its investigation, carried out by an independent barrister, Villa said that MacDonald’s behaviour would never be tolerated at the club these days, and Farrelly welcomed the coach’s departure, insisting that it showed “there is no place for people like him in football”.

Williams, though, clearly continues to feel a sense of gratitude towards the 58-year-old, although, he says, he has not had any contact with either MacDonald or McAndrew since leaving the club.

“No,” says the defender who is a contender to start at left back in Tbilisi, “that’s one of the things I regret. I saw Tony at one of my games a few years ago. He was in the stands, but I didn’t get to say hello.”