Timing of Euro qualifiers far from ideal for Mick McCarthy 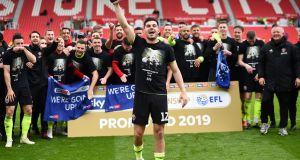 Ireland defender John Egan is among those who will be on Sheffield United’s end of season trip to Las Vegas. Photo: Nathan Stirk/Getty Images

Mick McCarthy admits that the timing of Ireland’s next qualification games is making life complicated as he tries to deal with players chasing or celebrating promotion, eyeing up the end of the club season as an opportunity to sort out injuries or looking beyond that to a move for next season. “It poses a challenge in terms of putting a squad together,” observes the Ireland manager dryly.

Aside from players who may be ruled out of the training camp in Portugal because of the promotion playoffs, Keiren Westwood is set to miss the two group games as he receives treatment on a knee injury over the coming weeks while James McCarthy is “trying to sort his future out”. Perhaps the most immediate concern for the manager is Sheffield United’s trip this Thursday to Las Vegas.

Two members of the club’s promotion winning side – David McGoldrick and Enda Stevens – are likely starters for Ireland against Denmark and Gibraltar while John Egan and, Scott Hogan, assuming he travels after featuring five times and scoring twice in the last month of the campaign, are in with a serious shout of playing some part.

McCarthy has been around this particular block more than most and knows well enough how things are likely to pan out but he is hoping that the players keep the qualifiers in mind between the trip and the time they meet up with the Irish squad for the training camp in Portugal.

“I can’t imagine for one minute that two or three of them are going to be in the gym doing a bit while the rest of them are out doing what you do in Las Vegas,” he says. “I think that is counterproductive in terms of managing them so I might as well embrace it and tell them to go and enjoy it. We have games when they come back, though, and they are all in the squad.

“To be fair, I spoke to Didsy (McGoldrick) today and (reminded him that) we’ve got plenty of time when they come back and his quote was: ‘Don’t worry gaffer, I won’t be wanting to do anything else, when we’ve had four or five days in Vegas I’ll be ready to come back and train and get ready for playing’. That’s what I’m hoping will be the case.”

James McCarthy, the manager suggested, would be left to sort his club career out after a season in which he spent a lot of time sidelined and almost all of the rest of it failing to get a competitive kick of the ball at Everton.

To date, he has managed just 15 minutes in the 4-0 defeat of Manchester United last month and, the manager said as he launched the promoted the FAI’s forthcoming Festival of Football and AGM in Trim this July, that made the decision to omit the midfielder from his 30 strong initial squad for the training camp in Faro and games in Denmark and Dublin, significantly easier to make.

English-born Willem II midfielder Daniel Crowley’s paperwork has not been completed and so he was never a contender for the competitive games but there might have been a place on the plane to Portugal had the Dutch Cup final turned out a little differently.

As it was, he got on for the final 30 minutes of his club’s 4-0 win but McCarthy, who had travelled to the game on the basis that the midfielder had been expected to start, had to leave before the end and so only got to see half of the time he was involved for. “He had nothing to do so I barely saw him play at all,” he says.

Things went rather better for Mark Travers who became the first Irish teenager to play in goals in a Premier League game when he made his senior debut for Bournemouth on Saturday. He played a key part too in his side’s 1-0 defeat of Spurs, something that impressed but didn’t necessarily hugely surprise McCarthy.

“When he turned up and trained with us, nothing fazed him,” says the manager of the teenagers brief stint with the Ireland squad in March. “He’s jumped into that and he was very, very comfortable. So it’s no surprise that he did well. He was excellent and Shay Given made his debut at 19 so it’s not age that is the barrier... if you are good enough.”