Uefa delegation in Dublin to discuss governance issues at the association 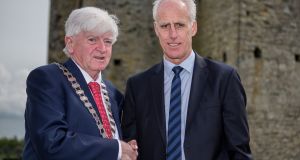 As Uefa swung by Dublin for discussions regarding the ongoing crisis at the FAI, the association packed Mick McCarthy off up the road to Trim, where the Republic of Ireland manager got to “launch” this year’s agm, which will be held in the town on July 27th.

Local dignitaries were out in force as local regional development officer Barry Ferguson provided an impressive account of the positive contribution he and his employers make to the community.

When McCarthy took the podium he offered the closest thing he has yet to a verdict on all that has occurred around the association during the past few months by observing that Ferguson’s presentation “epitomises the good work that is done by the FAI, unfortunately at the moment much-maligned”.

Amongst the audience were representatives of some of the county’s many clubs and the secretary of the league, Gerry Gorman, whose statement in support of John Delaney some time back was one of the more colourful pronouncements on the issue from the game’s grassroots.

There was some dissent at the time, and a lot has come out since, but Gorman seems be sticking to his guns.

“John has done a lot of work for grassroots football and he would be very welcome here in July,” he said when the formalities were over.

“Only for John Delaney this festival of football” – the week of glad-handing and giving of mainly small grants that used to generate a multitude of positive photo ops for the former chief executive in the run up to the agm – “wouldn’t be taking place in Meath. It is a pity that he hasn’t attended the Euro Under-17 finals. He’s getting a terrible time at the moment.”

Usually Delaney would have been at this event but he, of course, is somewhat indisposed. Board member Noel Fitzroy was present but only, it turned out, in order to pose for group pictures.

He was not available to comment on the current situation out in Abbotstown, and the association staffer present said he did not know who from Uefa had travelled in order to get a sense for themselves just what has been going on.

Representatives of the European federation met with senior FAI officials in the early part of the day before both parties sat down together with Sport Ireland later in the afternoon.

The visit had been prompted by the succession of damaging revelations which have laid bare huge governance issues at the FAI and resulted in a number of inquiries being launched into the association’s finances and governance, as well as prompting John Delaney to step aside pending a review of his part in events out at Abbotstown.

One of the key purposes of the trip, it seems, was for the Uefa officials to hold talks with members of the recently established Governance Review Group in order to outline how they feel some of the issues facing the FAI might be addressed in the course of any restructure.

Those views are bound to be taken seriously as Uefa is, by some distance, the biggest single external funder of the FAI, with its centralised broadcast deal for senior international teams forming the basis of support that comfortably exceeds €10 million per annum, far more than is directly provided by the government here.

Delaney, of course, remains a member of the organisation’s Executive Committee, essentially its board, but his absence, as Gorman noted, from any obvious role in the European Under-17 Championships despite his position as chair of the Uefa’s Youth and Amateur Football Committee suggests he is regarded to have been badly undermined by recent events by the blazers in Nyon as well as the ones in Dublin.

“Our Uefa colleagues are here to offer their support and insight to the Governance Review Group as we work together to improve Irish football,” said Rea Walshe, who has replaced him as FAI chief executive on an interim basis, in an upbeat public statement on the visit, however.

“Their visit is welcome. The experience and expertise within Uefa will offer real benefit to the Group as we work towards an initial report in June. They are here to help and the support from Uefa is welcomed by the FAI.”

Sport Ireland chief executive John Treacy said described the visit as: “a significant show of support to the work being carried out by the (governance) Group,” and said he was looking forward to “a productive meeting”.

Over the weekend it was announced that the Governance Review Group has invited submissions regarding its work and any potential reforms related to it from “stakeholders in the game including sponsors, the Professional Footballers’ Association of Ireland, FAI staff and the general public”. These can be sent by email to governance@fai.ie