Ireland U21 manager names Parrott, Connolly and Obafemi in squad for Italy clash 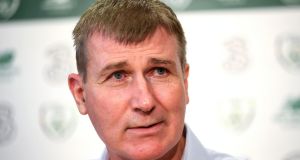 Republic of Ireland under-21 manager Stephen Kenny has spent much of the last week or so in England watching games with a view to finalising the 22-man squad. Photograph: Bryan Keane/Inpho

Stephen Kenny says he is fit and well again after having recovered from the health-related episode that required a few days in hospital after his Ireland under-21’s recent win in Sweden.

The 47-year-old says that after initially requiring medical attention when he felt unwell, the Swedes found and underlying issue that had gone undiagnosed since he was born. It is entirely unrelated to stress, he says, was addressed during the period away and requires no further treatment or attention. He declined to say what it actually was, however.

“I’m sure there’s interest in it but it is private medical stuff,” said the Dubliner as he named his squad for the forthcoming European Championship qualifiers against Italy [in Tallaght next Thursday] and Iceland [five days after that in Reykjavik].

“Listen, the only thing I can say is that I’m feeling great and I’m back living a full life. I’ve no further issues going forward. I’m very well. And certainly Sweden was a good place to be. I’m fine now and I’m not really willing to discuss in public my own medical situation.”

Kenny says he has spent much of the last week or so in England watching games with a view to finalising the 22-man squad named at Abbotstown on Wednesday but it is no surprise, given the two victories achieved last month – and the manner of them – that it is pretty much as close to unchanged as it could have been.

Certainly the same array of attacking talent is included with Troy Parrott, Aaron Connolly and Michael Obafemi among those set to feature in games that will give the clearest indication yet of whether this is the group that might actually become the first Irish under-21 ever to qualify for a major championship.

All are on Mick McCarthy’s radar with Connolly currently the most likely to get a late call-up depending on how things pan out for the senior team manager on the injury front over the coming days. Kenny will, he says, simply have to see, whether the 19-year-old Brighton player arrives into his camp or, assuming he does, stays for both games.

“It’s just the situation we’re in and I’m not complaining about that,” he says. “They are two hugely important fixtures in Georgia and Switzerland. That’s the nature of it, my job and I understand that. We want to have our best players available and that’s it. If it happens it happens.”

Up to 8,000 tickets have been assigned for the Italy game between FAI season ticket holders, free tickets to clubs and those that went on general sale. The fact that the game is a sell-out, though, only serves to highlight for the manager how we still fall down as a nation on the facilities front.

“It’s great to have sold the game out,” he says, “but we must be more ambitious in how we think. Everybody is looking for tickets now and we could have maybe sold the game out twice over. “There’s a massive demand for a 12,000-seater for example, or a 15,000-seater or more; we need something in between the Aviva and the rest.”