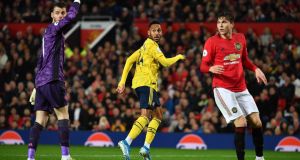 Arsenal striker Pierre-Emerick Aubameyang looks to the assistant referee after scoring in the Premier League game against Manchester United at Old Trafford. The off-side decision was overturned by VAR. Photograph: Paul Ellis/AFP/Getty Images

Such is life for the modern Manchester United the first point to make is that their supporters no longer need to check the bottom half of the Premier League to find their team. This result lifts them from 11th to 10th, just above the jagged line.

It is still not where they want to be – but Arsenal did enough, ultimately, to warrant a point from a thud-and-blunder evening that demonstrated how far these old rivals have fallen since the days when they harboured title ambitions.

On this evidence it is going to be a long way back. Scott McTominay did score a peach of a goal for United but they have not managed more than a single goal in their last seven matches in all competitions.

Arsenal’s equaliser came from Pierre-Emerick Aubameyang after VAR had overturned a rotten offside decision and, after that, neither side had the wit and guile to find a winner.

Points-wise, it is the first time since the 1989-90 season that United have not reached double figures from their first seven games and, to put that into context, that was the year Old Trafford chanted for Bryan Robson to take over and a banner appeared in the stands calling for Alex Ferguson, then just a plain old Mister, to be removed from office.

Old Trafford has changed a lot since then. The weather has not, though, and perhaps the near-unremitting Mancunian downpour made it tricky at times for the two sides to put on a better spectacle.

Or maybe that was being overly generous and it was more the case that both sides could have been expected to pass the ball more effectively.

Whatever the truth, there were not many spells of play to create the impression that either side should be closer to Liverpool and Manchester City in the top two positions.

It was, in truth, a bit of a stinker until the last few minutes of the first half when McTominay appeared to grow weary of the torpor and smacked in a firecracker of a shot.

The goal had originated from an Arsenal corner and it must have been startling for Unai Emery to see how vulnerable his team looked as soon as their opponents started streaming out of their own penalty area.

Nicolas Pepe and Matteo Guendozi had just had the opportunity to give Arsenal the lead after a slip from Andreas Pereira. David de Gea kept them both out and when the corner was swung over there was something nostalgic about the way the players in red managed to turn defence into attack in a few seconds.

Daniel James could not produce a telling cross but Marcus Rashford chased the ball towards the corner flag and then cut it back for McTominay to take aim from 20 yards. He struck the ball beautifully and the shot was still rising as it hit the back of the net.

Up to that point the first half had been a grind. Not a great deal happened in that opening half an hour and, as often happens when these teams meet nowadays, it left you pining for the days when this game was the biggest occasion in England’s top division.

Pepe put Arsenal’s first real chance into the Stretford End when he had more time than he probably realised. Pereira tried to liven up proceedings with a driving run and shot that Bernd Leno saved down to his left.

The away end chanted for VAR after a cross thudded into McTominay’s chest. The rain fell hard on a humdrum game. And at that stage United’s best hope appeared to be the high ball into the penalty area and someone getting on the end of one of Harry Maguire’s knockdowns. The absence of high-quality football was startling at times and, unfortunately for Granit Xhaka, his first game since being named as Arsenal’s captain contained an element of tragicomedy.

For Example A, consider his ability, at 0-0, to make a pig’s ear from a promising position at a free-kick. More damagingly for Arsenal, however, Xhaka was also culpable of ducking out of the way of McTominay’s shot. That’s right: the modern-day captain of Arsenal stooped to get out of the way of the ball when he might have reasonably been expected to be trying to make himself bigger, not smaller. His head was down, his eyes fixed on the floor, and the ball was spearing into the roof of the net.

It was the kind of moment to make Tony Adams, Martin Keown et al wake up in a cold sweat.

But it was that kind of accident-prone night. Axel Tuanzebe, playing at left back for United on a night when they were missing both first-choice full backs, had a solid first half, but it was an awful pass from the defender, just before the hour, that led to Arsenal’s equaliser.

Bukayo Saka fed Aubameyang and, though the linesman’s flag went up, the replays showed Harry Maguire had played him onside by some distance as the striker ran through the middle and flicked his shot beyond De Gea.

It was possibly the easiest VAR offside decision yet. United, however, had a reasonable argument De Gea would have made more of an effort to stop the shot had he not seen the raised flag.

Perhaps that will be a lesson for all the goalkeepers in this league, though McTominay might have lessened the home side’s disappointment if he had not wasted a golden chance to head in a potential winner. – Guardian