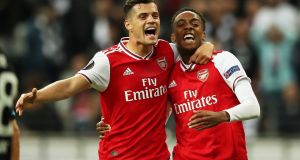 Sunday’s crisis is Thursday’s shining beacon of hope. A visit to one of the more feted sides in a competition they would rather not prioritise did not look a promising vehicle for Arsenal, so embattled after the shoddy way they lost their lead at Watford, but it turned into the best possible advertisement for their brightest young stars.

The 18-year-old winger Bukayo Saka set up their first and third goals, scoring a brilliant second; Joe Willock, a force full of invention in midfield, broke the deadlock before half-time on an evening that encapsulated this club’s ability to swing between poles of optimism and despair.

Umai Emery’s prodigies succeeded, quite thrillingly, in subduing a venue that gobbles its continental football up hungrily. Eintracht’s fans had filled the stadium to watch opponents as mundane as Flora Tallinn and FC Vaduz during the qualifying rounds and the atmosphere they drum up goes some way towards explaining a run of 16 unbeaten home games in European competition, stretching back to 2006.

It was some petri dish, then, for Emery to experiment with Saka and Emile Smith-Rowe. The teenage forwards had six senior starts between them but flanked Pierre-Emerick Aubameyang, who was one of four survivors from the starting line-up at Vicarage Road. Willock, who turned 20 last month, was deployed to scheme behind them and it all felt like the kind of blend that, in the present precarious climate, could go horribly wrong if things unravelled.

Such thoughts seemed irrelevant by the end of a stretched, see-sawing first half. For Arsenal the defining point was Willock’s goal in the 38th minute and they had already missed three easier chances. Their first meaningful attack saw Saka clip a well-weighted delivery from the left and Lucas Torreira, running in at the far post but half-volleying over from seven yards, should have rewarded his good work.

Shortly before the half-hour, Willock appeared to have missed his big opportunity when, meeting Aubameyang’s centre, he could only jab over when superbly placed. There was still time for Smith-Rowe, clean through after a smart pass by Granit Xhaka, to be denied by Kevin Trapp before Arsenal finally made an opening count.

It came after another purposeful dart from Saka, who passed to Willock and his team-mate jinked inside before letting fly. The ball spun into the net via a large deflection off David Abraham and a ricochet off the crossbar but Willock had earned his luck.

Eintracht are still adjusting to the departures of the strike force – Luka Jovic, Sébastien Haller and Ante Rebic – that scored 56 goals last season. They put Arsenal under intense strain midway through the half, the left wing back Filip Kostic working Emiliano Martínez and forcing a timely block from Xhaka. André Silva forced another stop from the Arsenal goalkeeper later on but the home side had paid for their openness at the other end.

Neither team re-emerged with much obvious intention of tightening up. Within four minutes of the restart Silva and Bas Dost had missed half-chances; within 11, Aubameyang had been denied at the last moment by Martin Hinteregger’s tackle after Willock had carried the ball from deep, and Xhaka had swung a free-kick against the bar from wide on the right.

Still nobody thought to turn the taps off and Silva should have equalised when picked out after another incursion by the impressive Kostic.

The pace was relentless, the errors almost too many to count, and Arsenal kept on returning Eintracht’s blows. A wondrous first touch from Saka afforded space for another ball through to Willock, whose angled effort was repelled by Trapp. Willock, whose all-round performance was outstanding, was replaced by Dani Ceballos shortly afterwards.

By now the home support, animated by the increasingly real prospect of seeing the game put beyond them, had turned up the volume. That came out in their deepening frustration at Eintracht’s frequent loose passes; it manifested itself in howls of anguish when the midfielder Dominik Kohr, who had already been booked, was sent off after fouling Saka.

Four minutes from the end Saka found space outside the penalty area, set his sights and bent a precise effort into the far corner; within 120 seconds of that he had played Aubameyang through for a routinely finished third. What a talent he is; what a perplexing, maddening and utterly compelling side Arsenal continue to be. – Guardian