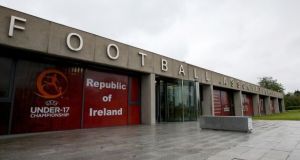 Sport Ireland says more time will be needed to complete an investigation into the FAI’s finances ‘in light of developments in recent days,’ and that it will be seeking more material from the FAI.

The first in-depth look at the finances and corporate governance of the Football Association of Ireland has been delayed, The Irish Times has learned.

The report, which was commissioned by Sport Ireland, had been due for submission to the body last week.

However, Sport Ireland has written to the Oireachtas Committee on Transport, Tourism and Sport, informing it that more time will be needed to complete the report “in light of developments in recent days,” and that it will be seeking more material from the FAI.

In the letter, signed by Sport Ireland chief executive John Treacy, he writes that KOSI Corporation, the firm contracted to complete the report has requested additional time to seek and review extra material from the FAI.

At the urging of the Committee, KOSI were tasked by Sport Ireland with examining the FAI’s finances in forensic detail.

Theirs was due to be the first of a series of reports into the association’s operations and financial management to be published with an investigation by Mazars, commissioned by the association itself, and another by the Office of the Director for Corporate Enforcement the most significant of the others still ongoing.

Former FAI chief executive John Delaney’s departure from the FAI was confirmed in a late night statement on Saturday from his former employers.

Few details of the severance package were provided and it was stated that the two sides had agreed not to make any comment on the matter.

“Given the vital importance of this matter, this request for additional time has been granted by Sport Ireland,” the Sport Ireland letter states.

Committee member Noel Rock TD said the reasoning for this delay is “disconcertingly vague. What new information did KOSI receive and when did they receive it?

“I think it’s only fair that we ask for and get answers to these questions which would underpin the fundamental question - on what basis did Sport Ireland sanction this delay?”.

Sport Ireland has also asked to defer the meeting it was due to have with the committee on the 16th of this month, in light of the delay to the report.

The letter gives no indication of the new date of receipt or publication of the KOSI report but indicates that it could be some way off.

It is one of a number of reports underway into the FAI.

“These steps are all part of out internal governance processes and are required within any audit process to ensure fair procedures are afforded to all parties”.

“These necessary steps will take some time, before the final report is issued to Minister for Transport, Tourism and Sport Shane Ross.”

John Delaney’s departure from the FAI was confirmed in a late night statement on Saturday from his former employers. Few details were provided and it was stated that the two sides had agreed not to make any comment on the matter.

Mr Rock said that “to an onlooker, this would look like an attempt to put space between Mr Delaney’s payoff and the first report on bad governance within the FAI being published or, in football terms, a clearance to Row Z.”

1 Shels chairman Andrew Doyle hits out at ‘appalling’ FAI governance
2 Players focus more on life outside game due to lockdown, says GPA
3 Heroic insanity: When Michael Dunlop raced home in memory of his father
4 Ken Early: PSG would be sensible final move for Ronaldo
5 Stuart Lancaster knows Leinster’s strength in depth will be key in busy schedule
Real news has value SUBSCRIBE
Crossword Get access to over 6,000 interactive crosswords