‘If you were to listen to that, you would be shocked. It wasn’t a pleasant call between two human beings at all’ 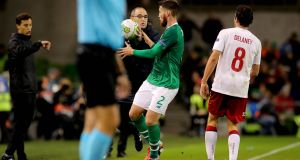 Matt Doherty collects the ball from Republic of Ireland manager Martin O’Neill during the Nations League game against Denmark at the Aviva stadium in October 2018. Photograph: Ryan Byrne/Inpho

Matt Doherty says that Martin O’Neill called him “a tosser” more then once before hanging up on him, ending the phonecall which was prompted by an interview the player had given to 2FM’s Game On the day after the Derry native left the Ireland job last November.

Speaking to Richard Sadlier on the Second Captains podcast, Doherty recalled: “He called me a tosser a few times and we were kind of going back and forth . . . and he ended up just hanging up the phone on me. I could go into more detail but I don’t want to bring it all back up again when it’s totally gone now. It wasn’t a nice phone call at all.

“I don’t know if I should say too much with the risk of getting another call,” he continued. “I don’t want to go through that again. If you were to listen to that, you would be shocked. It wasn’t a pleasant call between two human beings at all.”

Doherty also expressed somewhat qualified sympathy for international teammate Richard Keogh in the aftermath of the incident last week in which the defender suffered a potentially career-ending injury and two other Derby County players were charged with drink driving offences.

“I was surprised, and concerned to find out if he [Keogh] was all right,” said the Wolves player, “I have concern but then you’re looking at it and thinking it was completely avoidable for one. There was no need. Obviously you’re sympathetic but it was a really avoidable situation and it’s got very messy now.”

Doherty, who was named in Mick McCarthy’s squad on Tuesday for the games in Georgia and Switzerland, added that he rarely drinks these days and suggested that the only time the entire Wolves squad which, he says, includes, quite a few non-drinkers, goes out as an organised group is for the club’s Christmas party.