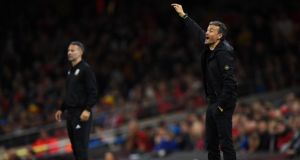 Spain manager Luis Enrique signals to his players during the during the friendly against Wales at the Principality stadium in Cardiff. Photograph: Stu Forster/Getty Images

Spain’s players were at the movies last week. On Tuesday afternoon, across the pitch from the residency and into the main hall at the federation’s Las Rozas HQ, north-west of Madrid, the entire squad sat for the first showing of a documentary about Luis Aragones, the coach who started it all, leading them to European Championship success in 2008.

Of the 23 players in the current set-up, only Sergio Ramos and Raul Albiol are left from that team but former players joined them for the film, put together by Aragones’s fitness coach Jesus Paredes. There were some tears and a lot of laughter.

In the build-up to the 2008 final against Germany, Aragones kept referring to Michael Ballack as Wallace, until a player corrected him. “I’ll call him whatever I like,” the coach replied, and then he proved it: in the tunnel minutes before kick-off he sidled up to the German midfielder and said, “All right, Wallace?”

Spain’s players couldn’t help giggling, the tension gone. They walked out in Vienna and won a major trophy for first time in 44 years, just as Aragones had always told them they could. Should, in fact. “If I don’t win with this team, I’m shit,” he said.

After the final, his contract still not renewed by the federation, Aragones told them he was leaving, but that they should not stop. “You can win the World Cup,” he said.

Spain, of course, did just that, eventually completing an unprecedented three-tournament run: European, world and European champions, but the first of those is a decade ago now. After the screening, Ramos suggested the film should be obligatory viewing for everyone, full of lessons and reflecting a philosophy – humility, work, dedication, team spirit – that “people have forgotten”.

The suggestion comes from within. Spain have now lost three tournaments in a row, failing to win a knock-out game. At times they have been unfortunate but within the federation there was a sense that some of the basics had been overlooked: that in Russia there was a lack of structure and discipline.

In part that may be a natural consequence of sacking the manager, Julen Lopetegui, three days before the tournament started, and it is expressed by a new regime which seeks to impose itself and mark a new era, but it was still striking. It was also a significant element in the decision to make Luis Enrique the new coach: a determined, disciplined leader.

Much was made of new rules imposed by Luis Enrique – too much, in truth, but there were changes – from mobile phones to timings. There were differences in personnel, too: 11 players who went to the World Cup were left out of the first call-up. Some had chosen to retire – Pique, Iniesta, Silva – but others were the manager’s decision. He said he had an open mind, that meritocracy ruled and that players would have the chance to earn a place in the side. “I like this squad,” he said. “I haven’t looked at whether they’re tall, small, nice guys or people I don’t much like.”

The talk, absurd at inception, had been that here was an anti-Madridista, a cule who resented Real and everything they represented, but look at his team in Wales last week – no Barcelona player in it – and look at his squad, packed with players from the Bernabeu. Listen, too, to the way he describes Isco, the admiration in his words.

More meaningfully, while his decision to leave out Jordi Alba seemed personal, like a hangover from their time at Barcelona together, look at Iago Aspas: the former Liverpool squad player did not make the first party but was called up after Diego Costa pulled out, and started against England at Wembley, so well had he trained. Luis Enrique admitted afterwards that Aspas had proved him wrong. Paco Alcacer and Suso, both called up this time around and both superb against Wales, continued that idea. “I do what I want,” Luis Enrique said, and what he wants is succeeding.

The biggest difference that most anticipated concerned style, subjected to a furious debate after the World Cup, yet Luis Enrique challenged that assumption. This would not be a revolution, he insisted, it would be an evolution, similar to what he did at Barcelona.

In Russia, Spain were eliminated having produced a thousand pointless passes, but that did not mean that passes were pointless. He recalled being a player and looking up at opponents over 6ft and thinking “hmm, maybe not”. Spain’s qualities were different, and he would seek to enhance those, not turn all physical. Yet condition mattered too, and Alvaro Morata noted the new coach’s desire for a “more aggressive” Spain.

Possession was to have a purpose. Few benefited like Saul, fundamental in the new midfield. Spain wanted the ball, to press into the other team’s half, to attack. Mobility is obligatory. Three games in Spain have won three times, scoring 12 – two against England, six against Croatia, four against Wales.

“This team does have goals,” one headline said, not needing to add “. . . unlike before”. It has a lot more, besides – everything seems to work, everything they try comes off. Against Wales, Rodrigo was superb making his first start in central midfield. Against England on Monday night, back at Real Betis’ Estadio Benito Villamarín in Seville for the first time in 23 years, the place where Spain famously defeated Malta 12-1, the expectation is high again.

After 44 years of failure, Aragones built his team up – “you’re the best players here”, he told them when they arrived in Austria – while Luis Enrique has sought to distance himself from that legacy, noting that there is still only one star on the shirt. Constantly recalling the team Aragones began probably does not help, fun though the film was, and much as there were lessons contained within.

There is talent there, he knows. There is a team, too. So far, things have gone better than even he imagined, he admits. On Saturday, he gave his players the first day off they’ve had since he took over, satisfied with all they have done so far, but not about to stop now. “The level is high,” he said, “the challenge now is to keep it there.” - Guardian

1 Gerry Thornley: After 32 weeks the Six Nations is back up for grabs
2 Extremes of sweet and sour for Solskjaer as Man United show signs of revival
3 Stockdale and Ringrose on board with expansive Irish game plan
4 Arsène Wenger: Arsenal was a matter of life and death to me
5 GAA expected to go ahead with championship under Level 5
Real news has value SUBSCRIBE
Crossword Get access to over 6,000 interactive crosswords