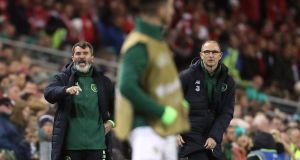 After a ship-steadying stalemate against Denmark, Callum O’Dowda is Ireland’s major doubt for the visit of Wales to Dublin on Tuesday night.

The 23-year-old was left looking dazed and confused by a collision midway through Saturday’s first half but soldiered on to the break. In contrast to last year, though, the condition did not become more widespread during the concluding 45 minutes of the game.

“I think that we are trying to get ourselves prepared,” said manager Martin O’Neill afterwards. “The competition [Euro2020 qualifying proper] starts in March and the draw will be made in December. [In the meantime] we have a difficult task ahead of us on Tuesday night but we are ready for it.

“We obviously want to beat them. After getting confidence from a clean sheet, I think we can go on. We definitely need to have more possession of the ball, you’ve seen that. When we did have possession and kept it for a little while, we looked fine. We looked comfortable with it.

“So the idea is, rather than to have little pockets of that, to extend that play. That’s really what I’m looking to try to do. Obviously it takes a little time. The overall picture is obviously the qualification games but in the meantime Tuesday is very important.”

O’Dowda’s ability to play a part will be assessed but O’Neill admitted that the Bristol Rovers midfielder had actually wanted to go back out for the second half but was replaced as a precautionary measure.

The early indications were that everyone else came through the game without any problems but O’Neill has brought in Ronan Curtis, who played for the Under-21s in their 3-1 European Championship qualifying defeat in Israel on Thursday.

For their part, Wales will be without Gareth Bale who has returned to Real Madrid due to muscle fatigue.

A few Irish players, O’Neill suggested, were tired because of a lack of recent first-team football at their clubs but the likes of Shane Long, he suggested, had actually coped better with the workload than he had expected.

There may still, for all of that, be changes with Callum Robinson, in particular, impressing after coming into the game for Harry Arter after 65 minutes. “I thought that he gave us a little bit of life which was nice,” said O’Neill. “He was taking some players on and the crowd took to him.”

Arter had done all right too, turning in a solid performance that included a goal-line clearance in the second half but he was replaced after picking up a cheap early booking that left him needing to be a little more cautious when making tackles.

Despite the premature end to his evening, the Cardiff City player was glad to be back and denied his night had been about trying to prove a point to any one individual in the Irish dugout.

“Every game you want to prove to yourself you are capable of playing this level,” he said when asked about the aftermath of the spat with Roy Keane that effectively kept him out of last month’s games.

“You want to be the best player in the game, I think every footballer’s mind it should do anyway. But there is no personal . . . no trying to prove anyone wrong. I just try and play the best I can for me and my teams in every game whether that’s here or in Cardiff and that’s that.”

O’Neill certainly seemed to feel that Arter and the rest of a central midfield that, slightly surprisingly, included Cyrus Christie, had done well for him. The Fulham man came in for particular praise having, the manager said, done much to help Matt Doherty get through his first competitive 90 minutes in an Ireland shirt.

Jeff Hendrick, he suggested, had been a little frustrated over the course of the 90 minutes by having to come so deep in order to get the ball, although that is unlikely how the Dubliner is likely to remember the night.

Just a few minutes in, the 26-year-old thought he had done well to nick possession and race clean through on goal. He had, however, failed to notice that Arter was down injured and the Danes had effectively stopped playing. With just Kasper Schmeichel to beat, Hendrick still missed the target and injured Ireland striker Jon Walters joked on Twitter about how sporting it had been of him to put the ball out for a goal kick.

“Jeff was totally unaware,” said O’Neill. “I’ve spoken to him and he did not know. He thought it was a sloppy pass.

“It would have been an interesting thing if he scored the goal,” he acknowledged, however. “It might have been one of those incidents where we might have to let them score at the other end.”

Overall, O’Neill believed the formation had served his team well. “For us at this minute, we probably need three players in the middle of the field,” he said.

“Outside of Cyrus we might not really have the legs to play a 4-4-2. We’ve seen that before. So we probably need three in the middle. If we can get help from having the two wing backs close to them, then fine. If they don’t get that help, then it can still be a long evening for them.”