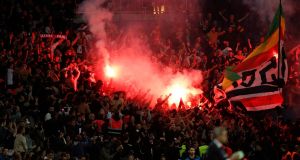 Flares are lit by PSG fans in the stands during the Champions League Group C match against Red Star Belgrade at the Parc des Princes stadium in Paris. Photograph: Yoan Valat/EPA

Earlier on Friday, French sports newspaper L’Equipe wrote on its website that European football’s governing body Uefa had alerted French authorities of possible match-fixing at the match, based on a tip from a “credible” informant.

L’Equipe said the informant had told Uefa, before the match, that a high-level Red Star official was planning to place nearly €5 million in bets on a five-goal-difference win by PSG, with the complicity of several players. This prompted the investigation. Paris St Germain beat Red Star 6-1.

The prosecutor’s office said it could neither confirm nor deny L’Equipe’s story.

Red Star denied the allegations made in the newspaper report.

“With the utmost anger and disdain, Red Star vehemently denies allegations that the club’s Champions League match with Paris Saint Germain might have been rigged. Red Star also strongly denies the involvement of any of the club’s officials in any such illegitimate acts,” Red Star said in a statement.

“Allegations from L’Equipe could cause considerable damage to our club’s reputation and Red Star Football Club therefore insists that UEFA as well as the authorities in Serbia and France should fully investigate these suspicions to find out the truth,” Red Star said.

L’Equipe wrote that no evidence of any match-fixing had yet been uncovered by authorities and that all options were possible, from match-fixing to false allegations.

L’Equipe quoted PSG as saying they were surprised and shocked by the allegations and that no one at the club had been contacted about anything other than issues strictly linked to organising the match.

In an emailed response to Reuters, Uefa said it never comments on potential, or the existence of, investigations into alleged match-fixing so as not to compromise the process of such investigations.

Meanwhile, Belgian prosecutors said on Friday they had charged 19 people, including two soccer referees, soccer agents and the coach of Belgian champions Club Bruges, with fraud or match-fixing.

Nine of the 19 remained in custody, including soccer agents Dejan Veljkovic and Mogi Bayat, charged with having set up schemes to hide fees paid to themselves and to players, and referee Bart Vertenten.

Ivan Leko, the Croatian coach of champions Club Bruges, was among those released, although he is charged with money-laundering. He returned to training on Friday.

“I will fight back. This is not the first time I was on zero . . . I didn’t deserve this,” he told the broadcaster VTM.

His club are playing in Group A of the Champions League with Atletico Madrid, Monaco and Borussia Dortmund.

Of the others charged, a number are officials at clubs KV Mechelen and Waasland-Beveren, who played each other on the final day of the regular season in March.

Prosecutors suspect that match, won 2-0 by Mechelen, and one a week before when FC Antwerp beat Mechelen’s relegation rivals Eupen 2-0, were fixed. In that game, Vertenten awarded Antwerp a penalty after a foul committed just outside the penalty area.

Prosecutors say Veljkovic colluded with officials and referees to prevent Mechelen being relegated, although the club, winner of Uefa’s Cup Winners’ Cup in 1988, did in fact go down.

Police raided 44 clubs and residences across Belgium on Wednesday, while a further 13 searches took place in France, Luxembourg, Cyprus, Montenegro, Serbia and Macedonia.

Among the nine soccer clubs targeted were Belgium’s “big three” of Anderlecht, Club Bruges and Standard Liege. The homes of directors, agents, referees and jewellers were also raided.

Mechelen has denied engaging in any illegal practices. Vertenten’s fiancee Hetty Boons told VTM he stood accused of something that he had had nothing to do with.

Bayat’s lawyer stressed to Belgian television that his client was not accused of match-fixing or corruption, only of money-laundering.

Leko’s lawyer said the only issue to be cleared up was a payment dating from 2015, before he was Bruges’ coach, and that there was no way that this could amount to money laundering.

Veljkovic’s lawyer, Kris Luyckx, spoke to reporters but did not comment on whether or not his client was guilty of any wrongdoing.

LA Rams see off Chicago Bears in a battle of the defences 08:45
Gerry Thornley on size of Ireland’s Parisian task; Son the star for Spurs again 07:48
Eddie Jones says he can’t guarantee England players will follow Covid-19 rules 06:55
Drogheda in the driving seat as Division One reaches a thrilling finale 06:00
Regionalisation may be the key as league adjusts to new reality 07:52