Thomas Delaney affords a laugh as international incident is avoided 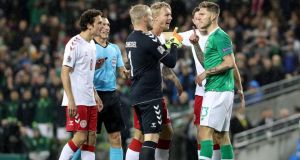 On a night of relenting drama, there was at least one incident to get a little warm under the collar about. Jeff Hendrick very nearly had to rule out Copenhagen as a city-break destination with his sleight-of-foot move early in the game, robbing Thomas Delaney as the Danish midfielder stopped playing to allow Harry Arter get some treatment. When he missed, Kasper Schmeichel gave Henrick the full flush of his rage, clearly roaring, “We don’t play like that!” repeatedly in his face.

Delaney was pretty magnanimous about afterwards in all truth, although it would have been interesting to see just how free and easy he’d have been had Hendrick scored and Ireland won 1-0. As it was, he was able to allow a small joke about it, playing along when he was asked did he think Hendrick missed on purpose.

“I do. He was thinking ‘Why am I alone here?’ No, but he didn’t do anything wrong. He just played the game. It’s a good lesson to learn. We see it every weekend, there is a time when you play it out and yet we all know you have to play until the whistle is blown. It is easy now to be rational about it but when the game is on you react.

“There was a player in the midfield, Arter, lying and players shouting kick the ball out. And yeah, I think I’ll do it, I turn backwards, I want to play it out and suddenly there is a fast Irish guy running towards me. I didn’t realise what happened. I think you look at the video, I just stand there. So yeah, of course, you have to play until the referee whistles but the reason why we maybe got a little bit mad was everybody heard it, even our goalkeeper. Of course, he says he didn’t hear it. I believe him.”

For the Danes, this is a third time entering Ireland’s orbit in the past year and the third time they haven’t been beaten. Short of Cristian Eriksen on Saturday night, they didn’t look anything overly special. They looked like what they are - a cut above Ireland with their world-class player, not so much without. Overall, probably superior but not by much.

“I would say so,” Delaney agreed. “But the reason why we love football is because the best team doesn’t always win. There has been two very difficult games and one where it was very different. I won’t stand here and say that we are way better a team and deserve to win. It’s football, we play by our strengths but when Ireland hit the level they did today and close us down, it’s difficult for us. I think the difference is the approach to the game, of course we both want to win but who tries the most.

“In the end, we’re in a good position. I wouldn’t say we’re completely happy with it. Maybe more satisfied we kept a clean sheet. We still have the option to close this ourselves. We knew it was going to be difficult. Thinking about the last time we were here, there was a lot to be undone by the Ireland players.”

1 Gerry Thornley: Antoine Dupont and France look perfectly primed for Ireland visit
2 Johnny Sexton: ‘We just know we have to be a lot better in all areas on Saturday’
3 Seán O’Brien: Anger over my parents’ break-up never left me
4 Neil Lennon brands criticism of Shane Duffy’s Celtic performances ‘hysterical’
5 Ireland's centre will hold thanks to Henshaw and Aki’s midfield muscle memory
Real news has value SUBSCRIBE
Crossword Get access to over 6,000 interactive crosswords