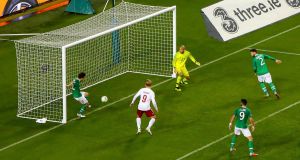 Ireland’s Harry Arter clears off the line during the Nations League match against at the Aviva stadium. Photograph: Oisín Keniry/Inpho

Having gone to the World Cup at Ireland’s expense then made it out of a group that included the eventual champions, the question before this was could Denmark do it again on a wet weekend night in Dublin. Thankfully, not like last time, it turned out.

Ireland, almost inevitably, were better than they were that terrible night last November but still might have struggled here had Christian Eriksen come to town again. As it was, Martin O’Neill’s side showed some attacking spirit in the closing stages but looked, first and foremost, like a side that didn’t want to get badly beaten again.

It was not the greatest of games, although it certainly came close, early on, to being memorable. After an uneventful start, Harry Arter went down injured and the Danes essentially stopped playing, although without putting the ball out. Thomas Delaney ended up with it at his feet and looked perplexed then angry as Jeff Hendrick stole it away and took off towards goal.

Had he scored, things would really have got interesting but, one on one with Kasper Schmeichel, he managed to avert a lot of unpleasantness and, potentially, Ireland having to let the visitors go down the other end to equalise, by completely missing the target.

Jon Walters joked on social media about the Dubliner having sportingly put it out for a goal-kick as Danes queued up to express their displeasure and James McClean managed to get into a bit of a confrontation with Martin Jorgensen. Little did we know but the half did not get so entertaining again.

O’Neill may not have been too concerned by that. The Ireland manager made six changes to the side that started the defeat in Cardiff, three more than he had to, and will probably have been pleased that his side were still firmly in things at the break.

It was a slightly surprising line-up with Matt Doherty starting at right wing back and McClean preferred to Enda Stevens on the other side. Arter returned to anchor a midfielder diamond that included Cyrus Christie on its right and Hendrick at its tip, behind lone striker Shane Long. Richard Keogh captained the side with Ciaran Clark on the bench after what was a difficult night in Cardiff.

What the starters managed between them was more solid than inspiring with Denmark probably having the better of things over the course of the first half, but not by any great margin. Shane Duffy headed Ireland’s only chance of note early on, from a free won by Long and chipped into the box by Hendrick.

Doherty was a little fortunate not to be punished by Jorgensen for getting the ball stuck under his feet as he sought to deal with a Henrik Dalsgaard cross just a couple of yards out and Pione Sisto clipping the outside of Darren Randolph’s post after cutting inside and shooting from 20 metres.

They would go close still just short of the hour in when Lasse Schone’s corner was headed towards the bottom corner by Simon Kjaer but Arter was on the post and cleared the ball off the line.

By then, Stevens was on for Callum O’Dowda, who had battled on to the break after having taken a knock. McClean pushed into the space he vacated on the left side of central midfield, but when his side didn’t seem to be posing any more of a threat, O’Neill brought Callum Robinson on for Arter.

The Preston forward, to be fair, injected some much needed energy into the Irish attacking side of things and was at the heart of what was comfortably Ireland’s best passing move, a break that involved six players, as many passes and, ultimately, a shot teed up for Christie by Long that Schmeichel did well enough to save.

For a few short moments it seemed as though Ireland might push on to dominate the closing stages but it never got an awful lot better than even. Randolph made his best save of the game as normal time ran out but it was actually a straightforward enough stop from Martin Braithwaite.

A crowd that had barely seemed to be paying attention for much of the night then reckoned they had an injustice to get worked up about in the dying seconds when Duffy went down theatrically after going for the same ball inside the Danish area as Dalsgaard. The penalty he wanted would have been incredibly soft and the Spanish referee reckoned the incident merited a booking for the Irishman.