O’Neill happy to restore order out of chaos 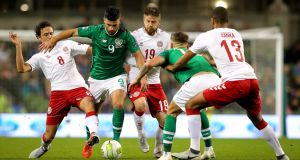 Ireland’s Shane Long is challenged by Thomas Delaney and Lasse Schone of Denmark during the Nations League match at the Aviva stadium. Photograph: Ryan Byrne/Inpho

Legend has it that when David Bowie moved to Switzerland in the 70s he got a surprise visit from Roger Moore who lived close by and the pair got on like a house on fire. Moore called again the next day and the next, telling the same stories each time until eventually his knocks at the door would prompt the singer to stay out of sight and mutter about it being “f**king Roger again”.

Had this game against Denmark gone anything like the last one then Martin O’Neill and his old friend Age Hareide might have found themselves in very much the same sort of territory. Happily the story that unfolded was rather different. The visitors, it turned out, weren’t quite so compelling without their star man.

Ireland, almost inevitably, were better too, even if they looked a little like outsiders attempting to spring a surprise on the road by keeping it tight for 70 minutes, then pushing out a bit in the hope of grabbing a winner.

O’Neill had seemed to baulk slightly before the game at the suggestion that the main priority would be to restore some order after the chaos of two straight competitive defeats, in which a cumulative nine goals were conceded.

Afterwards, though, he made no secret of his satisfaction with the fact that Ireland had kept a clean sheet that might serve as a foundation for something a little more ambitious against Wales on Tuesday night.

“I think that’s right,” he said. “Despite the possession that Denmark had, I didn’t think they caused us many problems. But that’s not the point. I think we can still push out a few yards and we should be trying to dispossess them further away from our goal at times. That’s what we’ll try to work on between now and Tuesday. But yes, I think it’s a start.”

Thomas Delaney somehow managed to come across afterwards as polite while describing Ireland’s football as “primitive” but in these particular circumstances the hosts would probably not have been especially aggrieved had they been labelled Neanderthal as long as the Danes left with nil beside their name in the scoreline.

“We did better than when we played them previously,” observed Harry Arter, in any case. “I felt we dug in deep. They really impressed at the World Cup and when they came here last time, so it was good to get a clean sheet. Obviously we would like to have been a bit more threatening in open play but I felt we deserved the draw.”

The Cardiff City midfielder, back from a brief spell in exile, did his bit to keep the visitors at bay, most obviously 13 minutes into the second half when Lasse Schone’s corner was headed goalwards by Simon Kjaer only for Arter to clear off the line from his position just inside the post.

“The manager works really hard on the set-pieces,” he said. “The lads, you know, we know our jobs defending and attacking and I think in the past we have proven how successful we can be on the training pitch with our attacking in set-pieces. And there are no excuses for goals going in from set-pieces given what we do.”

Sure enough, one of Ireland’s only two real scoring chances here came from a first half free that Jeff Hendrick chipped perfectly into space for Shane Duffy, the Brighton centre back heading wide when he really should have tested Kasper Schmeichel. Cyrus Christie did that much, at least, with the other, a driven shot from 25 metres that followed a sweeping move forward by the home side late on.

Shane Long, who put in a typically industrious performance while never coming close to scoring himself, teed the strike up after a move that also involved two of Ireland’s substitutes, Enda Stevens and Callum Robinson.

Had Christie scored and Ireland won the game, the result would have flattered Ireland but the Danes had no real complaints with the draw. The visitors failed to capitalise on some uncertain moments of Irish defending and while Pione Sisto clipped the outside of the post with a shot from distance towards the end of the first half, Darren Randolph didn’t have to make a save of real note until the end of the second when Martin Braithwaite’s low strike lacked the power that would have been required to beat the Irish goalkeeper.

The wider performance was something of a mixed bag from a side much changed from the one that was so well beaten in Cardiff. Richard Keogh returned as captain and seemed to help steady things from the right side of a three-man central defence but Matt Doherty will presumably feel he has more to contribute than he did here on what was his first competitive start.

Even without Christian Eriksen, the Danes kept Ireland on the back foot for long periods – although never with the sort of menace the Tottenham star provides – and Long looked isolated for much of the game despite Hendrick’s best efforts to provide some support.

The Burnley midfielder provided a poor game’s main talking point when he sought to score amid the Danish uncertainly caused by Arter being down injured. That, though, was an innocent misunderstanding which is probably more than can be said for Duffy’s late penalty claim.

The big defender was booked by the Spanish referee for diving. Of far more significance was the fact that his Ireland side have, for the moment at least, put an end to their stumbling.

1 Shock at golf clubs as sport faces shutdown in Level 5
2 Level 5 golf shutdown: Ireland one of few countries to close courses
3 Molde turn up the heat in the second half to dim the lights on Dundalk
4 Philip Reid: Hard to find the sense in closing golf clubs
5 Gordon D’Arcy: Ireland don’t need to do a Finn Russell on it
Real news has value SUBSCRIBE
Crossword Get access to over 6,000 interactive crosswords