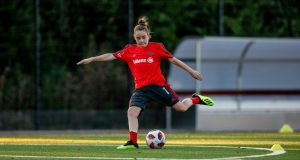 US soccer player Olivia Moultrie during a training session with Bayern Munich in 2018. Moultrie has signed a representation deal with Wasserman Media Group, a sports agency, and an endorsement deal with Nike, at 13. Photograph: Daniel Etter/The New York Times

Two years ago - in a move that delighted some in women’s sports and shocked others - Olivia Moultrie announced that she had accepted a scholarship offer to play college soccer at the University of North Carolina. She was 11-years-old.

On Monday, Moultrie, the youngest girls’ soccer player to publicly accept an academic scholarship offer, became the youngest girls’ soccer player to then officially forgo her college athletic eligibility. Now 13, Moultrie announced that she had signed, in short order, a representation deal with the Wasserman Media Group, a sports agency, and a multiyear endorsement deal with Nike. In taking those two actions, Moultrie formally began her professional career.

Moultrie’s agent, Spencer Wadsworth, declined to disclose the terms of the Nike deal, except to say that it was worth more financially than a four-year scholarship at a top university, which is generally valued at about $300,000 (€265,000).

“It’s just a shift in women’s sports,” Wadsworth said. “You see it more and more now where women’s soccer is catching up to the men’s side, and there’s more opportunities for them.”

Moultrie has already drawn worldwide attention for her prodigious technical skills and her family’s non-traditional approach to her nascent career. She has long played with older girls on the United States youth national team and with boys’ clubs near her family’s home in Canyon Country, California.

Last year, Moultrie made multiple trips to Europe to meet and train with some of the continent’s biggest clubs: Olympique Lyon and Paris St Germain in France, and Bayern Munich in Germany. And with the help of her father, KC, she has maintained an active presence on social media, often posting highlight clips to more than 87,000 followers on Instagram.

“I feel for literally almost every kid in girls’ soccer, you should go to college; there’s not a million dollars at the end of the rainbow,” KC Moultrie said in an interview with The New York Times last year. “I think if you’re truly, truly elite, if your goal is to be a world-class player and a pro and, in Olivia’s case, to be the best player in the world, there’s no way it’s better to play college than it is to play full time.”

Moultrie’s next step is unclear. A move to Europe is most likely impossible for several years; Fifa rules, with certain exceptions, generally prevent youth prospects from signing with foreign clubs before they turn 18.

A far more likely prospect would involve Moultrie’s latching on as a developmental player with a team in the top United States league, the NWSL. But that path has its own obstacles; before she could ever sign a professional contract, the league would essentially have to create new allocation rules to deal with her unique situation. In addition, a player currently must be 18 to play in the NWSL.

Moultrie has been on her unconventional path for years. She began intense, soccer-specific training when she was seven-years-old, started home schooling as a fifth grader to free her schedule for more soccer, and eventually became the first girl to play for a boys’ club team in the United States Development Academy system. She was 10 when she began attending college showcase camps, and at 11 she accepted a full scholarship offer from North Carolina.

That she gave up the scholarship was not a huge surprise. For one thing, companies like Nike and Adidas had long had Moultrie in their sights. Last year, when she was still an amateur, Nike featured her in a local promotional campaign for one of the company’s soccer boots. On Sunday night, Moultrie appeared briefly near the end of a Nike commercial that aired during the Academy Awards.

Anson Dorrance, the longtime coach at North Carolina who had offered Moultrie a scholarship, said on Monday that he was pleased Moultrie had signed a deal for what he presumed was a significant amount of money, noting that the vast majority of women’s soccer players still struggle to make a steady living as professionals. He said Moultrie’s deal was a good development for the women’s game.

“We knew what was in the water, and we have no issue with this,” Dorrance said about Moultrie’s decision. “We lost a great player to the professional ranks, and we totally support that, if the financial incentives are good.”

Though it has long been common for boys in the United States to skip college to pursue soccer careers, it is a move that has so far made sense for only a few girls.

Just two members of the current United States women’s national team, for instance, have walked away from college scholarship offers for professional opportunities. Mallory Pugh was 19 when she did it two years ago, joining the NWSL’s Washington Spirit before ever suiting up for UCLA. In 2012, Lindsey Horan joined PSG at 18 after having accepted a scholarship offer from North Carolina.

But in doing so at 13, Moultrie has become an extreme outlier, even if - in all likelihood - it will be years before she has an opportunity to prove herself before a wide audience.

Dorrance said her skills were more than sufficient for her to thrive. The one, big question that remained, he said, was how much more she would mature physically.