Jump Girls really are a breed unto themselves

Heartwarming documentary a remarkable insight into women in horse racing 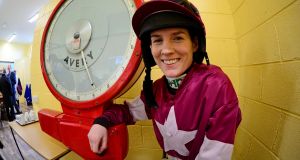 Rachael Blackmore: doffed her cap to the likes of Katie Walsh and Nina Carberry who paved the way for other women jockeys with their remarkable careers. Photograph: Healy Racing.

Quiz time. Who said: “Women are stronger people than men mentally. And men arse-lick a bit, and women don’t. The real strong women say ‘go **** yourself!’”

Was it (a) Simone de Beauvoir, (b) Hillary Clinton or (c) Ted Walsh?

If Ted isn’t careful, they’ll be calling him a Feminazi.

Jessica Harrington chuckled heartily on having his declaration relayed to her, but she remained tight-lipped, neither confirming nor denying that she herself fits the description.

It was one of many gems of scenes in the Luke McManus-directed Jump Girls on TG4, the second and final part of which airs tonight (Thursday, 9.30pm).

There’ve been a few pearls of documentaries on Irish sportswomen over the last year or two, Shauna Keogh’s film on Cora Staunton, also shown on TG4, and Ross Whitaker’s big screen study of the life and times of Katie Taylor top of the tree. And Jump Girls is up there with the best of them. It’s a delight.

Mind you, one of its stars is actually a Jump Boy – of the four-legged kind. Sizing John, he of Irish Gold Cup and Cheltenham Gold Cup-winning fame, is the main man in Harrington’s yard, his early morning moodiness only lightened when Kate, Harrington’s daughter, plays his favourite music through her phone when she takes him for a ride.

And there he was, displaying more than a little swagger as he trotted along to Katy Perry’s Roar. By now if he’d started neighing ‘I got the eye of the tiger’, you wouldn’t have blinked.

“His head starts bopping when he listens to his playlist, it definitely improves his mood,” said Kate for whom Sizing John is, she admits, “the love of my life”.

Back in the office at the Commonstown Stables in Kildare, Kate and her sister Emma, who both work for their mother, are trying to teach Jessica how to use Google Calendar, but she’s resistant, preferring, she says, to keep everything in her head. A head which she says “gets like a washing machine’ on race days, watching her watching her horses in action the stuff of epic viewing, Harrington quite literally living and breathing every stride.

And then there were the jockeys, Katie Walsh (now retired), Rachael Blackmore, Lisa O’Neill and Lizzie Kelly among those featured in the first episode.

Or “jockettes” as Harrington recalls some in the racing world labelling the female of the species when they were first allowed jump over fences.

The changes she has lived through, then, are mind-blowing, and a feature of the chats with each generation of the women interviewed is their gratitude to the perseverance of those, like Harrington, who came before them.

Blackmore, currently having the season of her life with 82 winners to date, putting her second only to Paul Townend (88) in the race to become Irish champion jockey, doffed her cap to the likes of Walsh and Nina Carberry who paved the way with their remarkable careers.

“There were no big barriers for me to climb,” she says, “they got rid of all of them.”

There was a beaut of a grainy old clip showing Blackmore winning her first ever race, steering her pony around bales of hay to beat, of all people, Townend.

Fast forward to 2018 and we see her arriving at Leopardstown, handbag draped over her arm, her elegance and style making her look like she was bound for the catwalk. Some time later she’s caked in muck and close enough to breathless at the end of a race and all you could sense was her sheer exhilaration.

Which was what overcame Katie Walsh and her parents too that day in Cheltenham last year when she rode Relegate to victory in the Champion Bumper, soon after witnessing brother Ruby’s brutal fall in an earlier race.

“A heartbreaking day for Ruby, a heart-filling day for me,” said Katie, “what other sport does that to you?”

Ted and Helen’s heads must have been like washing machines too, from the horror of watching their son’s fall to the sheer ecstasy of witnessing their daughter’s success, all in the one afternoon.

“It was a magic moment,” said an emotional Ted, “we [himself and Helen] just looked at one another and said nothing. The silence said it all.”

And that’s one of the lovelier features of Jump Girls, how it captures the impact on the families of their loved ones’ highs and lows, like when Lisa O’Neill triumphed in Cheltenham in 2017 and we saw her parents Tommy and Margaret watching the race in a pub in Ashbourne. Their reaction? Was their something in your eye?

No-one, after all, knows better than those parents what went in to reaching the level their daughters now compete at, all those 4am starts, as Lizzie Kelly talked about, all of which, she said, were made worthwhile that 2016 day when she became the first woman to win a Grade One race over jumps.

Kelly was wearing a jockey cam that day, so from the comfort of our couches we got a hint of how gruelling, treacherous and terrifying the job of a jump jockey is. Some of us needed tummy and head medicine to assist our recovery from just watching.

As Ted said of Katie, “hardy”.

Jump Girls, a breed unto themselves.