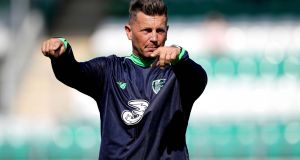 The Ireland women’s team will kick off their campaign to qualify for the 2021 European Championships with home games against Montenegro followed by Ukraine towards the end of this year but will have to overcome a mammoth challenge to qualify after being drawn in the same group as the continent’s top ranked side, Germany.

Irish hopes of making it to England for the finals are likely to come down their ability to get the better of second seeds Ukraine over the course of the campaign. The Eastern Europeans were, like Ireland, third seeds for the recently completed World Cup qualifying campaign, which they finished with the same number of points, 13. They are ranked just five places above Colin Bell’s side in Europe. Greece are the other the team in the five nation group.

Aside from the nine group winners, the three best runners-up will qualify with the remaining six playing off for a further three places at the finals.

Although beaten by the Danes in the quarter-finals of the last European Championship, which was won by the Netherlands, the Germans continue to be ranked the continent’s top side, with only the USA currently ahead of them on the world ladder.

The Irish will head to Germany in April of 2020 before wrapping up their group programme with a home game against the eight-times tournament winners that September.

The Germans last visited Dublin for a competitive game as part of the qualifying campaign for the 2015 World Cup when they secured a narrow win in a game that finished 3-2 in Tallaght after the hosts had taken an early lead.

“Germany are obviously one of the top seeds in the world,” said Colin Bell after the draw was made. “Ukraine will be a tough team to break down and they’ve really developed in recent years with one or two outstanding players.

“They’re second seeds so we’ll respect them like we will all of our opponents but guaranteed, the work towards facing the opposition starts now. We’ll be approaching every single game like it is a cup final for us and that is the mentality we will need to get to the finals.

“We’re still a young side so we need to keep working hard in the next international matches and be as prepared as we can be in September.”