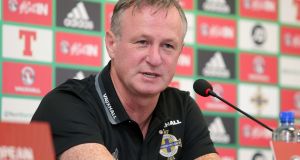 Michael O’Neill: his side have kept seven clean sheets in their qualifying group and haven’t lost a competitive game at home in four years. Photograph: Charles McQuillan/Getty Imagese

Such is Michael O’Neill’s respect for Germany, who have not lost an away World Cup qualifier in 83 years, that he organised a 10 v six training session this week in preparation for the world champions’ visit to Windsor Park.

Northern Ireland played as the 10, in case you were wondering. It reflects the success of his forensic methods, however, that respect between countries of such contrasting resource and achievement is mutual.

“This has the air of a final,” said Joachim Löw, the head coach who led Germany to their fourth World Cup title in Brazil and on to the verge of Russia with a flawless qualifying campaign of eight wins from eight.

“It is first against second in the group. Northern Ireland have practically qualified for the playoffs and they can go top of this group. They will not play all-or-nothing football but they will definitely be risk-orientated because they have nothing to lose. They have exceeded expectations in many respects but they are where they are by rights. There’s a lot at stake and both teams know it.”

Northern Ireland are assured of second place in Group C and well-positioned to claim one of the eight World Cup playoff berths next month, although not yet mathematically certain.

Having risen magnificently from 129th in the world rankings to 20th under O’Neill and kept seven clean sheets in eight qualifiers, the manager says they are “approaching it with a sense of optimism rather than anything else”. But with realism, too.

Injury to the 37-year-old defender Aaron Hughes is a significant setback for O’Neill’s strategy with Craig Cathcart already out. Despite Löw’s withering critique on the current state of the Bundesliga, and Germany being without Timo Werner, Mesut Özil and Mario Götze, losing a 37-year-old is not something he has to worry about.

“I watched Germany at the Confederations Cup,” the Northern Ireland manager said. “They are the only country in the world who could go with a lot of players not selected or rested, introduce new players and win the tournament. All the other nations went with their strongest squads.

“They won the European under-21s this summer too without their strongest squad. I thought [Leon] Goretzka, [Sebastian] Rudy and Werner were very impressive.

“One thing Germany do better than any other country is their succession planning. We have Gareth McAuley and Aaron Hughes as key players. They’re 37. Philipp Lahm retires at 32 and they have another one coming along at 19 or 20. The new players have freshened up the German squad.”

Germany’s run of unbeaten away World Cup qualifiers stretches over 46 matches and dates back to March 1934.

They arrive in Belfast having won 12 consecutive away qualifiers but well aware of the difficulties they will face against a Northern Ireland team that have not lost a competitive home match in more than four years.

The referee in that last defeat, Danny Makkelie of the Netherlands, sent off three players as Portugal won 4-2 at Windsor Park with a Cristiano Ronaldo hat-trick. He is also in charge of Thursday’s match.

“If Germany are the underdogs then we can play fancy-free and without pressure,” joked Mats Hummels when asked whether he feared Northern Ireland’s home record.

“It will be like an amateur club meeting one of big teams of the Bundesliga in the cup. Joking aside, we know it will be hard in a passionate environment. Northern Ireland showed at the Euros that they are capable of keeping up with the big teams.”

“Michael O’Neill has earned great merit for Northern Ireland,” he added. “You only keep seven clean sheets in qualifying when you know what you’re doing. Few teams in the world can switch so efficiently between man-marking and space marking. That is really due to his coaching qualities. What we’ve also analysed is that the team-mates coach each other on the pitch. That also adds to Northern Ireland’s good performances.” Guardian service

Ex-Ryder Cup player Gordon J Brand dies aged 65 18:02
McGill in control against Wilson at the Crucible 17:34
US Masters to be held behind closed doors in November 17:18
Bundini Brown: The man who invented ‘float like a butterfly, sting like a bee’ 17:00
Griggs names 36-strong women’s squad 17:14