Meanwhile, Roy Keane took yet another swipe at Everton and their team of ‘scientists’ 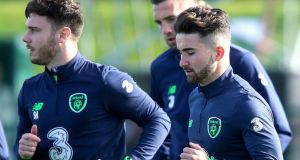 Sean Maguire and Scott Hogan during Ireland training on Tuesday ahead of the final two World Cup qualifiers with Moldova and Wales. Photo: Gary Carr/Inpho

Their recent record at club level may not mark them out as the panacea for Ireland’s problems but Roy Keane is hoping that strikers Scott Hogan, Sean Maguire and Aiden O’Brien can make a mark against Moldova by adding a little more of a threat to a team whose established strikers have found goals desperately hard to come by over the course of the current campaign.

Martin O’Neill’s men are, with Azerbaijan, one of only two top three sides across eight qualifying groups still trying to get their goals scored column into double figures. In Dublin, their record is fairly dismal with just two goals scored in four games.

Overall they have eight but James McClean got three of those with Jon Walters and Seamus Coleman scoring one apiece and none of those three are available for Friday night’s home game with only the West Brom winger set to return for Wales away.

Keane baulked at the suggestion on Tuesday that he and O’Neill will be pushing their players to be more positive in what are games that Ireland badly need to win, insisting as the manager had the day before, that both the tactics and team selections have always been intended to produce goals.

However, he did accept that there have been times when various individuals’ decision making had let the side down and expressed the hope that the likes of Maguire or Hogan might add to Ireland’s ability to cause opponents problems around the six yard area.

“You want someone who is a goalscorer, who has that knack,” said the former Manchester United star. “And if you look at their track record – Maguire and Hogan – you know that at whatever level they have played, they do know where the back of the net is. We have just not had someone of that nature.”

Daryl Murphy has actually been doing fairly well again this season with six in 12 for Nottingham Forest but he still has just one for Ireland – a consequence, he might argue, of the role he is asked to play although he too has passed up the occasional opportunity.

“Obviously you want your players to hold it up and you want them running down the channels but there have been a number of times, even in the last 15 or 20 minutes, when we have had balls going into the box and you’re just waiting for a player to make the right run or just get on the end of it. Maybe these lads will bring that to us.

“Instead of being our main striker this Friday night, if there is 15 minutes to go and we are putting balls in the box, maybe one or two of these lads would be more of a poacher for us. I hope that’s not being disrespectful to them but I think they will be able to strive to get across to the near post. It’s something different to the others, Jonathan Walters, Shane Long, who are good at stretching teams … sometimes you need that fox in the box. They have got that, certainly Maguire and Scott. They have that in their DNA. Now whether they can go and produce it…”

He does accept that neither has made an unanswerable case for inclusion with their recent club form but Maguire he says, has “settled in well,” at Preston even if he has not been nearly as prolific as he had been at Cork. Meanwhile Hogan, somewhat similarly, did enough at Brentford before moving to Aston Villa, to demonstrate “that he knows where the back of the net is.”

Over at Everton, as he whiles away the international break, Ronald Koeman can probably relate to Keane’s theme but the pair are unlikely to explore the matter further in any friendly way given the ongoing antagonism over James McCarthy.

The Dutchman could, at this stage, be forgiven for wishing he might never hear of or from anyone connected with the Irish management team and Keane’s latest cut at the Premier League club is unlikely to herald a détente between Dublin and the blue portion of Merseyside.

“James seems to be getting a lot of injuries at Everton,” said Keane when asked whether the previous tensions between the two parties might give particular pause for thought when weighing up the midfielder’s current progress, “so I don’t think we’ve anything to worry about with how much we push James.

“The medical staff are all over it, they’re in contact with Everton. I think they’ve more scientists involved than there needs to be.

Koeman might take that as a suggestion that Keane is already ruling McCarthy out of both games but the assistant manager’s tone didn’t suggest that the words should be taken too literally. Everyone in the squad is apparently in contention to play some part. If he does, one suspects, Koeman will be waiting at the training ground next Tuesday.