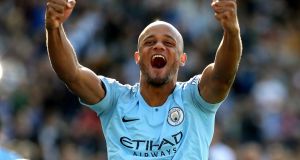 Vincent Kompany has announced he will be leaving Manchester City after 11 years. Photograph: Nick Potts/PA Wire

Vincent Kompany has announced that he will leave Manchester City this summer – drawing the curtain on an 11-year spell with the domestic treble winners – and that he will make a shock return to the Belgian club Anderlecht as player-manager.

In a two-part open letter on his Facebook page that was released the morning after he led City to a resounding FA Cup final victory over Watford, the City captain revealed the game had been his last for the club before explaining that he will take over at Anderlecht, where he began his career.

Kompany wrote: “Not so long ago, I took a call from RSC Anderlecht. Quite unexpectedly, they offered me the position of player-manager. Michael [Verschueren, the sporting director] and Frank [Arnesen, the technical director] explained to me in detail how they saw it working in practice. They had thought it through. I was left not only impressed, but also intrigued by this sign of confidence in me.

“This may come as a surprise to you. It’s the most passionate yet rational decision I’ve ever made. As a footballer, I was born and raised at RSC Anderlecht. Since the age of six, I have been one with that club. A history of 34 league titles, they are second to none.”

Kompany had previously posted a message regarding his City career. “We’ve just seen the close of an incredible season,” he wrote. “My 11th as a Blue. And I cannot believe I’m writing this but . . . also my last as a Blue. Countless of times have I imagined this day, after all, the end has felt nearby for so many years.

“It still doesn’t feel real. Man City has given me everything. I’ve tried to give back as much as I possibly could. How often does someone get the chance to end such an important chapter, representing a club with such great history and tradition, in such a great fashion? The time has come for me to go now.”

The City chairman, Khaldoon Al Mubarak, paid tribute to Kompany on the club’s website. “There have been many important contributors to Manchester City’s renaissance, but arguably none are more important than Vincent Kompany,” he said. “He defines the essence of the club. For a decade he has been the lifeblood, the soul, and beating heart of a supremely talented squad.”

Kompany made 360 appearances for City since joining from Hamburg in August 2008, scoring 20 goals. The most recent of those, a long-range winner against Leicester earlier this month, brought City to the verge of their – and his – fourth Premier League title. He also won two FA Cups and four League Cups with the club. The 33-year-old is expected to make at least one more appearance at the Etihad Stadium when a testimonial is held in his honour on September 11th.

At Anderlecht, Kompany played 103 times between 2003 and 2006, making his debut aged 17 after coming through the youth ranks. The club were Belgian champions twice during that time but have hit on tough times recently and can finish no higher than fifth in the top flight this season. – Guardian

1 Solskjaer requires more than Sancho to mount a title tilt
2 Stirling and Balbirnie tee off to tee up another famous Ireland win over England
3 The running life of Shane Healy, Ireland’s most daring Olympian
4 Different Strokes: Bryson DeChambeau’s rules debates doing him no favours
5 The shuttle run that will get you to your desired fitness destination
Real news has value SUBSCRIBE