Running the rule over Mick McCarthy’s men after a late, late dramatic draw in Dublin 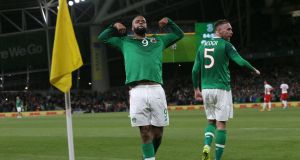 Didn’t have much to do all night but was strong in the air when clearing a few Swiss crosses. Couldn’t do anything about the goal and was calm and composed on the ball when Ireland tried to play it out. Rating: 7.

Got forward as usual and played a good captain’s role. Ireland look to be trying to pass it out from the back more and Coleman was comfortable doing that. Also made a vital clearing header late on when Switzerland looked destined to score. Rating: 7.

Undoubtedly Ireland’s most important player and that late petulant yellow card could come back to haunt him later in this campaign. However, he was a rock at the back once again, particularly in the air while two vital tackles on Embolo and Seferovic stopped possible goals. Rating: 8.

His fearlessness matches up nicely alongside Duffy and, like his centre-half partner, he won a number of vital headers to deny Switzerland good chances. Continues to make a case for his place in the team despite John Egan laying down his own claims. Rating: 7.

An early booking means he’ll be suspended for the trip to Georgia and he’ll be missed as he’s settled nicely into the left-back role. He got forward a bit more than usual and delivered some dangerous crosses. Looks solid and definitely Ireland’s best option in that position. Rating: 7.

His set pieces continue to be one of Ireland’s most dangerous assets and his delivery in the first half in particular could well have led to Ireland taking the lead. Switched the play nicely in what was quite an open game with plenty of space in midfield. Rating: 7.

Was sometimes left isolated in the midfield as Hendrick and Hourihane got forward but he coped well and got back to clear a dangerous cross in the six yard box late on. Also nearly equalised with a spectacular strike from 25 yards which pinged the crossbar and eventually led to McGoldrick’s goal. Rating: 8.

Has looked a little absent in a number of Ireland matches recently and did so again on Thursday night, perhaps brought on by the fact he has only played four Premier League minutes for Burnley so far this season. Could possibly have tracked Schar for the Swiss goal but didn’t notice him go through until it was too late. Rating: 5.

Looks like he is probably Ireland’s most creative player but was slightly off the pace on Thursday night. One nice flick to McGoldrick in the first half almost led to a chance for McClean but aside from that there was little else and he made way for Judge after an hour. Rating: 5.

Has a hue work ethic which was needed in the second half in particular when he dropped back onto the right. Lacked end product in the first half, particularly when he sped through and failed to find Robinson but his brilliantly-time header was a just reward. Rating: 8.

Frustrating lack of end product on a number of occasions again but his doggedness paid off in the end as he delivered the cross for McGoldrick’s goal, albeit helped by a deflection. Defended well but is still wasteful in possession at times. Rating: 6.

Alan Judge made a difference when he came on for Robinson and perhaps his biggest contribution was a clearing header at the back post when Rodriguez looked like he would have a tap-in to an open net. Scott Hogan and Alan Browne weren’t on long enough to be rated. Rating: 6.

Ireland already look a lot more comfortable on the ball under Mick McCarthy than they did under Martin O’Neill and his decision to pick strikers who had exactly zero international goals between them before tonight paid off with McGoldrick’s header. Rating: 8.

1 Gordon D’Arcy: There’s more to Saracens’ success than money
2 Seán Moran: Total disregard for schools as GAA votes one way and acts in another
3 Marcus Rashford expects to be fit to help United ‘claim top 4’
4 David McCann eager to begin U-20 Six Nations defence
5 Johnny Sexton to return to training on Thursday
Real news has value SUBSCRIBE
Crossword Get access to over 6,000 interactive crosswords