Not the most pleasant football, Yann, but Ireland are top of the pops

Four forwards named in this squad, now there’s one international goal between them 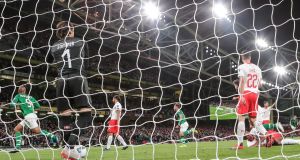 The build-up to this one had been quite low-key, the nation not exactly all a-tizz in anticipation of the resumption of our Group D campaign, and with the Swiss being our opponents on Thursday night it was hard enough for us to shift our emotions out of neutral. But then their goalkeeper Yann Sommer stirred it all up with a savage pre-match barb - Ireland, he said, “play a very unpleasant style of football” - and that was it: Bring. ‘Em. On.

Ireland have, of course, played a very unpleasant style of football in recent times, but that’s for us to say, as we often have, and quite fruitily too during the darker days of the Trapattoni/O’Neill/Keano spells.

But this was Game Five of the new Mick McCarthy era so Sommer was talking through his hosepipe, and Darragh Maloney left it to Damien Duff, Liam Brady and Richie Sadlier to explain why.

“The four strikers in the Irish squad have never scored for their country,” Darragh reminded us, so for some positivity it was time to switch to Sky.

“Four forwards named in this squad,” said Scott Minto, “not one international goal between them.” Jonathan Walters and Phil Babb’ lower lips quivered. Although Jonathan, you’d imagine, would have welcomed a quiet night after the week that had been in it.

Back to RTE and the lads weren’t exactly Riverdancing about the place on seeing the Irish team, Liam trying hard to spot where goals might come from, ending up lamenting the non-selection of another of our non-scoring front men, Shane Long.

Richie wasn’t pining for the fella, though. “It’s been a long time since I’ve looked at an Irish line-up with Shane Long in it and said, ‘this fella is a goal threat’,” so he was happy enough for others to be given their chance.

Damien, as ever, was given the task of analysing the opposition, and he does it with so much gusto, most likely spending hours on The Google, that you can only salute him. He stopped just short of giving us the inside leg measurements of the entire Swiss line-up, although he did treat us to their transfer fees and the like.

The inclusion of Glen Whelan. “The midfield is always a worry,” was all Liam could say, he left it there, his furrowed brow suggesting he was looking forward to watching our Whelan-led middle department play as much as he might relish the prospects of a root canal.

Best of all, though, was his take on Switzerland’s Granit Xhaha who, evidently, he had still not forgiven for gifting Spurs a penalty in last weekend’s North London. He almost expectorated when he mentioned the lad’s name. There’s a Gunners tattoo on Liamo’s heart.

First half. And that’s all you can say. The only moment of note was when Jim Beglin suggested that the referee “loves his whistle - he’s s keen blower”. And George Hamilton deciding it was time to rename Conor ‘How-ra-han’, having irked the Cork viewership for long enough by opting for ‘Hooer-a-han’. That was exciting as it got, really.

The studio consensus was that the Swiss were the better team, them being on a roll with 60 per cent of the possession, but the chief source of relief was that when they entered the final third of the field, they got much the same collywobbles as our boys do when they venture that far forward.

As you were. Until George and Jim banjaxed us by noting how rubbish the Swiss finishing was when they got even a sniff of a goal. “For all their possession,” said George, “they haven’t been creating chances either!” Need it be said, in or around 60 seconds later Switzerland scored.

But….. Gawd bless your cotton socks, David McGoldrick. One attempt on target in the second half, one goal. If you look at that through rose-tinted glasses, that’s a 100 per cent success rate.

Four forwards named in this squad, then, now there’s one international goal between them. So onwards and upwards. And it mightn’t be the most pleasant style of football, Yann, but damn it, top of the group. Stick that in yer hosepipe.

1 Conor McGregor hails Donald Trump as ‘USA goat’
2 Gerry Thornley: Saracens very late to apologise for repeated cheating
3 Talk of Celtic’s title demise is ‘very premature’, says Neil Lennon
4 José Mourinho feels Troy Parrott isn’t ready to step up yet
5 Champions Cup final: How to get there, how to get tickets and more
Real news has value SUBSCRIBE
Crossword Get access to over 6,000 interactive crosswords