Irish manager Martin O'neill remains positive that ireland can still qualify after drawing with Scotland 1-1 in the Aviva Stadium. O'Neill was also critical of the referee in the post match press conference.

Emmet Malone and Ken Early dissect Ireland's 1-1 draw with Scotland from the Aviva Stadium. Martin O’Neill’s side failed to secure the win they required to significantly improve their qualifying prospects. 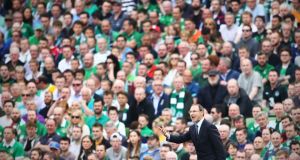 There is rarely a good time to hear the strange music of Scottish bagpipes. But an hour into what was supposed to be an exhibition of Irish fury at the old fortress of Lansdowne felt like mockery.

The wait for the thunderous win that would announce the real beginning of the Martin O’Neill era goes on and as Ireland and Scotland played out a 1-1 draw in pale sunshine on Saturday evening there is a distinct fear now that it may never be seen.

Ireland’s aspirations of joining the other Celtic nations at the European Championships next summer looks in need of a small miracle after this failure to win a match that was there for them.

Shaun Maloney’s goal – a wickedly deflected shot off John O’Shea – cancelled out Jon Walters’s point-blank strike and the collective effort of what passed for a spellbinding first half by the Irish team.

The stalemate leaves Martin O’Neill’s campaign hanging by a thread.

“This was the chance to go in front of Scotland. But we are not out of it. Genuinely not out of it,” the soft-spoken Derry man said later.

“I have seen groups before and things turn and twist. We are looking too far forward to be looking at Germany and Poland but it might come down to us needing something from those two games.”

The annoyance for O’Neill – and for Ireland – lies in the fact that there is nothing much to choose between these Celtic nations: both football teams are flamboyant in their ordinariness.

Still, on that frigid November night in Glasgow and again on a fine evening in Dublin, Scotland played with a kind of uppity – if slightly mystifying – authority which made it clear that they at least believe they are superior to their Irish counterparts.

They did have the tidiest player on the field in James Morrison and an out-and-out orchestrator in the nimble – and mouthy – Steven Naismith.

O’Neill cut an exasperated figure on the sideline as all of the early first-half promise and noise just kind of died away and gave way to the familiar scenario of a gung-ho last 15 minutes and the inspirational sight of Robbie Keane – sadly bereaved on this occasion and not quite match-fit – entering the fray obliged to somehow rescue the hopes of the nation.

Ireland couldn’t create an opportunity for Keane to poach and, anyway, there was something disheartening about the inevitable return to the Tallaght kid as a hero of last resort.

Walters’s 38th-minute goal originated in a set-piece: a whipped delivery by Robbie Brady and a convincing header by Daryl Murphy with the big Stoke man loitering to bang home David Marshall’s save. Replays showed a blatant offside but Irish football has never been about making a big deal of illegal goals.

Apart from that, the Scottish goalkeeper was never really stretched as Ireland pressed in vain for a winning goal.

“But we haveto improve our chance [to goals] ratio. And not just a final 15-minute burst where you are putting everything into the area. We have to try to be a bit more creative around the field.”

It sounds marvellous. But how? And when? And against Bastian Schweinsteiger and company? Wes Hoolahan carried an element of smooth menace about him when he found space and Jeff Hendrick made things happen during Ireland’s richer passages of play, when the Aviva Stadium trembled as in the old days.

But the second half was more about effort and bluster than any cutting-edge threat. The Scots looked far too comfortable in Dublin. O’Neill has paid more than passing mention to the frustrations of the broken coaching periods that define international management. He reaches the summer break with many more worries than his Scottish counterpart.

Gordon Strachan was in typical form on Saturday evening: arch, acerbic and entertaining. You get the sense that the impetuosity which informs the Scottish approach to this campaign has its source in his diminutive frame. “What an occasion! To get that intensity in June is ridiculous. It is quite phenomenal. I think that intensity comes from desperation to win. It is something you never see in June.”

And nobody could say that the effort from both sides wasn’t absolute. The desire to match the passionate ovation of the opening minutes was there in Glenn Whelan’s clattering tackle on Scott Brown and in Hoolahan’s aggressive closing down of Alan Hutton.

Ireland pressed aggressively, testing Scotland on both wings. Robbie Brady’s deliveries were mixed but Seamus Coleman’s radar was in huge malfunction mode. But with the scoreboard reading 1-0 at half-time, an old familiar buzz returned to the stadium.

The Scots equalised before anyone – including the Irish defence – had settled down for the second half. “All I know is that a very good player has scored a wonderful goal again,” purred Strachan as he recalled Maloney’s other goal in November.

“He is the most conscientious footballer I have ever come across. He deserves everything that he gets.”

The goal emboldened the Scottish play to the point where they looked as if they might do the unthinkable and go and win the thing.

The darting presence of Ikechi Anya bothered Ireland along the left, forcing a brilliant and desperate clearance by Shay Given in the 65th minute. All the old nerves and doubts raced back in.

The team is getting no younger. The association is in turmoil. The internal decision to shred 18,000 match programmes containing John Delaney’s thoughts on Fifa was the latest FAI administrative distraction in what has been a spectacularly uncomfortable time for the association.

The reappearance of Jack Charlton in Dublin last week evoked warm memories of grander, louder football days. Perhaps the real trouble is that Ireland are still modelled on Charlton’s 1980s formula – a big name manager; a team cobbled together from cross-channel players and campaign after campaign played out on a wing and a prayer.

Ireland’s Euro 2016 campaign is not over but it looks to be finished.

And even if O’Neill’s boys do somehow manage to benefit from a series of small miracles and makes it to France, it still leaves the question of where the Ireland football team is going.