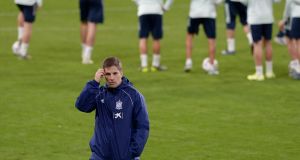 Robert Moreno has been replaced as Spain manager by the returning Luis Enrique. Photograph: Cristina Quicler/AFP/Getty

Luis Enrique has returned as Spain’s manager on Tuesday, five months after giving up the post. He left because his nine-year-old daughter, who subsequently died, was seriously ill with bone cancer.

His former assistant, Robert Moreno, who took over as head coach in June and had previously run the side in Luis Enrique’s name, will leave immediately.

Moreno walked out of the Metropolitano stadium in tears and without a word following Spain’s 5-0 win over Romania on Monday night. The players did not speak to the media either.

It is the fifth managerial spell for Spain since June 2018, all under president Luis Rubiales. Julen Lopetegui was sacked on the eve of the World Cup after agreeing to join Real Madrid following the tournament. He was replaced by Fernando Hierro for the competition and he was followed by Luis Enrique, Moreno and now Luis Enrique again.

Luis Enrique left the team camp in March, on the eve of their meeting with Malta. He continued to manage the team from a distance, with Moreno on the bench on his behalf.

Moreno was named as the permanent manager with a contract until the summer, although in September he said he would stand aside if Luis Enrique found himself able to return, insisting that friendship came above all else.

It was understood he would continue to form part of the coaching staff, returning to his former role as assistant. But the way it was finally managed appears to have made that impossible.

Rubiales had recently spoken to Luis Enrique about a return. When the media suggested that Moreno might be replaced, Moreno insisted that he laid more trust in what he had been told internally than what was said in the media and that his intention was to continue.

After Spain’s match with Malta on Friday, Rubiales insisted that he had faith in Moreno but he sought to put off talk of who would take the team at Euro 2020 and failed to confirm that the coach would keep the post.

That he had spoken publicly and failed to put a lid on speculation, instead deepening it, made Moreno aware of moves undertaken behind his back, precipitating events on Monday night.

Hurt not so much at Luis Enrique’s return but the way it was handled, Moreno did not speak in the press conference after the 5-0 win. He had not been in a fit state to do so and refused to appear before the media.