Keith Duggan: Resolve, composure, but not the result Ireland needed

With play-offs to come, strange and winding campaign ends on a positive note 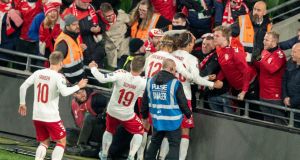 Never a dull moment, at least not in those wild, injury-time seconds when time and the world in general is pressing hard against the Republic of Ireland team and the players on the field are pulsing with raw belief and surging recklessly in chase of late glory.

On a frigid night in Dublin, Mick McCarthy saw his team gave the finest performance of this campaign. They deserved to beat Denmark but some law of physics seems to pull these teams together. Ireland couldn’t put the gloss on a plethora of chances. The Danes ghosted through to convert their one true moment, finished by Martin Braithwaite.

It took a bravura goal by Matt Doherty, who had a splendid night but was guilty of losing Braithwaite for those few fatal seconds in the 73rd minute, to give Ireland five minutes and injury time to rescue their campaign. Ireland then squeezed a season’s worth of football into that madcap, thrilling closing passage. But it finished 1-1 anyway. The Danes rode their luck.

“He’s gone and got the equaliser so I’ve forgiven him slightly,” McCarthy said of Doherty. “I was saying earlier that I’ve said it’s a bad goal to give away and then forgot to congratulate him for the goal so I’ll go back in and do that.”

The Irish manager was in a conflicted state afterwards: proud of the performance, vexed at seeing his team punished for that one lapse and a bit testy about what the play-offs, a distant reality now given that they don’t take place until next March. A visit to Slovakia or Wales is on the cards, with victory in the first game leading to a clinching game probably in Bosnia or Belfast.

“Well I’ve got three months to prepare for that. Let’s see who we get. I’ll plan for it when we get it. Play as well as that against other teams and we can beat them. Everyone is asking me about the Denmark game when we lost 5-1. It has no bearing on it. I think sometimes you believe we are shallow and not mentally tough. You get bad results and you come back and get back in. They were terrific tonight and I’m proud of them.”

From the beginning, Ireland showed the resolve and composure to play the ball out of defence, despite the lurking danger of Christian Eriksen.

“You must have havin’ me on. They played exactly the way I asked them to play and how we asked them to play,” McCarthy said when asked if he had instructed the team to play out like that. “We had a beautiful surface out there to play on. I can assure you no team of mine goes out to do what they want.”

They bullied the Danes in physical exchanges and became emboldened as the game deepened. The chances began to mount but the goal would not come. There were plenty of periods, too, when the Irish crowd had time to sit back and admire the extraordinary durability of Glenn Whelan. There’s still a feeling, watching him crankily and efficiently dictating his team-mates out there, that Whelan is the glue holding the entire thing together.

Here he is inching towards 100 caps and a much maligned figure on RTE’s panel for a fair portion of those, aged 35, spending Saturdays kicking football for Heart of Midlothian and clattering into Eriksen and whipping in a late first half viciously promising cross which was just an inch or so too high to meet the redoubtable noggin of Shane Duffy.

Just before that, he watched him ghost into the Denmark penalty area as David McGoldrick let fly with a speculative right foot. To see him in such an advanced position was kind of shocking because he has become such a permanent fixture on the defensive side of the centre-circle, spoiling, checking, working, rigorously unfashionable and ever indispensible.

His best moment was when he nipped at Jens Stryger Larsen, won the ball and then bitterly protested a yellow card. Never say he doesn’t care. At this stage, Eamon Dunphy should have a Glenn Whelan poster on his bedroom wall. Up front, McGoldrick brings a new dimension to Ireland’s attack and both Alan Browne and Conor Hourihane flourished as Ireland came to dominate the night.

Unlike those other threadbare nights of the late O’Neill era when Ireland struggled to piece together phases of consistent play, here was an Ireland performance to enjoy. There was imagination and verve, even, in the approach play. Apart from Doherty’s thumping header, the only thing Ireland lacked was a composed finish. McCarthy gave a sigh when asked if he felt his side had not been clinical enough.

“Well quite clearly we weren’t. I think that answers that to be honest.”

He has been here before and maybe McCarthy remains slightly spooked by the unfortunate outcomes of his play-off experiences the first time around. But with the opportunity for young players like Troy Parrott and Aaron Connolly to earn more club football minutes before the play-offs, this phase of a strange and winding campaign ends on a positive note. A 1-1 scoreline has so often been the final outcome after raging Republic of Ireland international nights, but there was a bit of cut and dash about this result that promises another twist in McCarthy’s long and storied managerial life.

1 Jim McGuinness: There is a way to save championship and make it competitive
2 Waterford turn Kilkenny upside down and inside out
3 Waterford’s frenzied waves of attacks too much for Kilkenny
4 Once in a blue moon: Cavan’s overnight success 15 years in the making
5 Sordid murder of hurling brothers still resonates in south Galway
Real news has value SUBSCRIBE
Crossword Get access to over 6,000 interactive crosswords