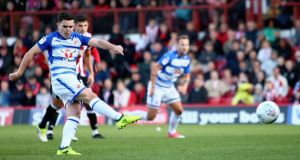 Liam Kelly in action for Reading. The Reading midfielder has told Martin O’Neill that his ambition is to play for England. Photograph: Harry Murphy/Getty Images

Reading midfielder Liam Kelly has declined the call-up he received Martin O’Neill for this week’s international game against Turkey in Antalya with the 22-year-old midfielder informing the manager that his ambition to play for England.

Kelly, who qualifies through grandparents from Mayo and Leitrim and has previously played for Ireland at underage level, has done well in the Championship this season, cementing his status a key player for Reading in midfield and scoring six goals, a couple of them fairly spectacular.

His latest came at the weekend, in a 3-2 defeat away to Norwich, and that eye for goal would have been one of the key factors to appeal to O’Neill.

The midfielder, who was born in Basingstoke, was actually named in the squad for the home game against Wales a year ago but pulled out of that squad through injury. At the time he described the call-up as “another proud moment,” and expressed the hope that his time would come with Ireland but he subsequently had to miss the trip to America as Reading were in the promotion play-offs.

Speaking after training in Belek, near Antalya in Turkey on Monday afternoon, however, O’Neill said that despite all of the positive previous indications that he was onboard, Kelly was clearly reluctant and having initially failed to return calls, he texted the manager to inform him that he would not be travelling this week.

“Despite the fact that I knew where he was born, I thought that was okay. I spoke to his agent some quite considerable time ago and I think that was always going to be okay I felt (but) I’ve always said here it’s the player’s choice; it’s exactly what it is and if he wants to think that England might come in, that’s entirely his decision.”

At club level, manager Jaap Stam has been hugely positive about the player’s development, recently agreeing that there elements of his game that bore comparison to Barcelona’s Andreas Iniesta.

“Liam has been outstanding for us,” he said. “He can pass, move, he can get past in a one v one, defensively he is aggressive and he presses the opposition going forward. These are qualities that nowadays big teams like to have in their team - size (he is not tall) now doesn’t always matter.”

O’Neill remains reluctant, meanwhile, to take Declan Rice’s international future entirely for granted despite the 19-year-old’s strong indication on Sunday that he is committed. O’Neill says he was encouraged by the West Ham player’s comments and that he sees his versatility - he seems equally comfortable in defence or midfield - a major plus.

“I don’t want to be pressurising him,” he said, “but I think he feel that he’s come up through the ranks - that doesn’t mean anything of course - but, yeah, I think he’s pretty strong and hopefully that will work out.

“I think playing in a number of positions is good for him for a start He might have a preference for a position at the moment but in 18 months time he might change his mind completely and think ‘I’m more comfortable here,’ or ‘I can influence the game in some aspect if I’m a certain position’.

“At club level he will have to find that. If, for instance, he steps in here in a defensive midfield role and does well in the game then of course it’s something we could consider as long as he’s comfortable playing in those positions.”

1 Betting shops face uncertain future as they prepare for Monday reopening
2 Mature Ringrose keeping the ups and downs of rugby life in perspective
3 Tianna Bartoletta: ‘After you’ve gotten your medal, you become black in America again’
4 Ian O’Riordan: An education in race and running during college days in America
5 Matt Williams: World needs team sport more than ever in these tough times
Real news has value SUBSCRIBE
Crossword Get access to over 6,000 interactive crosswords