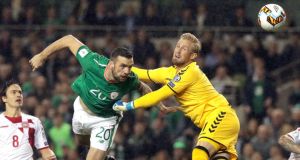 Michael O’Neill may have sought to focus the recent debate about defection on players who never get to shine at senior level, but the importance of the brightest northern stars to the Republic was underlined at this year’s 3-sponsored FAI International Awards, where Shane Duffy picked up the top prize and James McClean won recognition for his goal against Wales.

Both men moved centre stage for Martin O’Neill over the course of Euro 2016, and after missing the games in March last year Duffy earned comparisons to Richard Dunne for his performances against Austria, Serbia and Denmark away and scored the early goal in Tbilisi that ultimately got Ireland a point in the game against Georgia. He was rewarded on Sunday evening with the senior player of the year award.

Like his fellow Derryman, McClean cemented his place as a certain starter for Ireland in 2017, with the winger’s importance to Martin O’Neill growing over the course of the World Cup qualifying campaign despite his club-level problems.

McClean had a few moments to remember, but the one that clearly stands out was the goal in Cardiff, one that Jeff Hendrick and Harry Arter both had a big hand in before the former Sunderland player coolly applied the required finish. It is no surprise the effort picked up the best-goal award.

For his performances when covering for injured skipper Seamus Coleman, Cyrus Christie received the young-player gong. As usual the recipient, now 25, stretches the term a bit, but it would be hard to begrudge him the recognition. Still, that he played more minutes for Ireland last year than any other member of the squad probably means more to him.

Turkey match
He may get a few more this Friday night in Turkey, to judge by the revised squad O’Neill has named to travel on Monday morning. Defence is by no means the most badly hit department in terms of withdrawals, but there is a strong sense of spring training camp about the list now, with the three goalkeepers, for instance, having just one senior cap between them and only Shane Long, among the strikers, having been a part of the group this time last year.

Sean Maguire added weight to his case for a first international start over the weekend with another goal, his fifth in five games, for Preston, but Declan Rice, Alan Judge, Conor Hourihane and Matt Doherty will all see the week away, and Friday’s game, as an opportunity to catch the manager’s eye.

O’Neill said that he had been impressed by the former Cork City striker’s progress at Preston but suggested the player needs time to grow into international football. “Seani’s now beginning to show that he can score goals for his club,” he said. “He’s got a bit of something, which I’ve said to him before. He’s got a bit of something, although he’s still a long way away.

“To chance the fortunes [of a team] at international level is putting a lot of undue pressure on a player. You don’t just expect somebody to come in and change a team’s fortunes, [although] unfortunately I’ve sometimes to expect a player to do it.”

Maguire’s goals for Cork City early last year were, in any case, enough for him to land the Airtricity League award, although the weather stopped both he and Duffy making it to Dublin for the awards; both will link up with the squad on Monday morning.

The Ross County goalkeeper Aaron McCarey, from Monaghan, gets his first call-up in nearly five years after both Keiren Westwood (groin) and Rob Elliot (back) were ruled out by injury. Arter (calf), Robbie Brady (knee) and James McCarthy (broken leg) are among the established midfielders not making the trip.

Darron Gibson, who has been sidelined by injury since the start of the year, was never intended to, but his career at Sunderland looked to be under threat over the weekend with the club suspending him after he was again arrested for drink driving.

Friday’s game, which is to be broadcast live on RTÉ, kicks off at 5.30pm Irish time.

4 Ireland will be looking for clinical edge in Rome, says Farrell