Ken Early: Arter can be Ireland’s middle man for years to come

Arter, Hendrick and McCarthy can form Ireland’s midfield unit for next few seasons 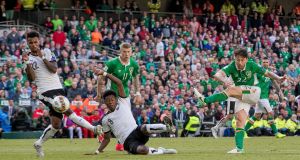 Nature abhors a 100 per cent record. Georgia have been this country’s best friend in international football, sabotaging qualification group rivals like Bulgaria and Scotland, while obligingly losing all eight matches they have played against Ireland. The wins have been getting more difficult, and the run has got to end sometime.

It is essential for Ireland’s hopes of qualifying that Saturday is not that day. They gave up the chance of taking control of the group by drawing at home with Wales and Austria, and dropping points against Georgia would give Wales renewed hope that Ireland can be chased down.

There is also the concern that Ireland currently rank eighth in the table of the nine second-placed teams, and the ninth-ranked runner-up does not make the play-off round.

The last time Ireland went to Georgia they won thanks to Aiden McGeady’s best ever performance for the national team. The points were crucial in getting Ireland to Euro 2016, but it still feels like a disappointment that McGeady wasn’t able to summon that level of performance more often.

McGeady might start in Tbilisi again if Martin O’Neill decides to use Robbie Brady in a more central role. The manager’s options infield are limited because of injuries to Jeff Hendrick and James McCarthy, although some of the football these two have played makes you wonder if we might one day look at their international careers the same way we look at McGeady’s.

It might seem strange to say that about Hendrick, who has already delivered excellent performances for Ireland in an international tournament, yet it remains to be seen whether he has what it takes to become a really top player for Ireland.

He has got great technique and the size and strength to be a presence even in Premier League midfields, but it’s not enough just to have the quality. You also need to know how to use it. Hendrick is too often passive, as though he is waiting for the game to come to him rather than taking control of it himself.

The worrying thing for Ireland is that this is what Giovanni Trapattoni meant about McCarthy when he criticised him for lacking “personality”. In his distinctively unobtrusive way, McCarthy is having one of the more disappointing Ireland careers of recent times – not because he has played particularly badly, but because, like McGeady before him, he has fallen so far short of the hype that surrounded him in his early days.

At 26, McCarthy risks becoming one of those players who go from tomorrow’s hero to yesterday’s news with no intermediate stage of success. It’s hard to pinpoint where it went wrong for him. His career probably started off too well – making his debut for Hamilton Academical aged 15 and playing more than 100 matches before his 19th birthday – and those early miles on the clock might have contributed towards the injuries that have stalled his momentum in recent seasons.

He also spent too long playing for Roberto Martinez. For seven seasons between 2009 and 2016 he worked under the current Belgium manager, first at Wigan and then at Everton.

In Scotland McCarthy had been a box-to-box player who scored goals, but Martinez saw him strictly as a Spanish-style “pivote” – the deep-lying midfielder who starts off the moves, or what Roy Keane refers to with a hint of impatience as a “sitting” midfield player.

Martinez refined all the impetuosity out of McCarthy’s game, and maybe the process went too far. McCarthy spent so long sitting that he forgot how to get up out of his chair.

Whatever the reasons, the fact is that his career has plateaued and even if he was fit he would not be getting into the Everton first team ahead of Morgan Schneiderlin or Idrissa Gueye. This is a player who needs to take back control of the direction his career is taking, and that means showing some of the personality that Trapattoni was always challenging him to express.

If he is looking for a model to remake himself on he could do worse than pay attention to Harry Arter. Here is a player who is busy both in defence and attack, active, responsible, always involved, consistently one of his team’s most important players. Hendrick too could learn something from Arter’s intensity.

With Glenn Whelan and Wes Hoolahan in their mid-30s, Arter, Hendrick and McCarthy have the opportunity to form Ireland’s central midfield unit for the next few seasons. For now Arter is leading the way.