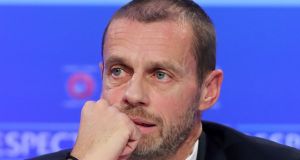 All of Europe’s 55 national football associations will hold a video conference with Uefa on Wednesday to discuss the latest proposals for how the 2019-20 season’s leagues and cups may be concluded given the depth of the Covid-19 crisis.

With Britain, Italy, Spain, France, Switzerland (where Uefa is based) and other European countries in much stricter shutdown conditions than even a fortnight ago when Uefa postponed this summer’s European Championship, the June 30th date suggested for concluding the season now looks even more improbable.

The video call, with the associations’ general secretaries or chief executives, will receive updates from the two working groups set up on March 17th, one to consider rescheduling challenges for the suspended seasons, the other to examine “the economic, financial and regulatory impact of the Covid-19 outbreak”.

Clubs, leagues and Uefa are determined to finish the season if at all possible for reasons of sporting integrity and to avoid owing a huge financial rebate to broadcasters and sponsors. The groups have focused on how players’ contracts due to end on June 30th can be extended if the season has to run beyond then.

Fifa, which has overall global responsibility for governance of player registration rules, considered proposals last week for extending contracts until “the new end date of a season,” Reuters reported. A problem for Fifpro, the world players’ union, is that this should apply to all players whose contracts conclude on June 30th, not just those a club wants to keep.

The Uefa president, Aleksander Ceferin, summed up the uncertainty over the resumption of football at the weekend, telling the Italian newspaper La Repubblica: “There is a plan A, B and C. We can start in May, in June or the end of June. If we can’t do it on any of those three dates then the season probably would be lost. There is also the possibility to finish the season at the start of next season, with next season starting a little late. It would have to work with respect to the players and the signing periods.”

Uefa said in a statement: “The meeting will look at developments across all Uefa national team and club competitions, as well as discussing progress at Fifa and European level on matters such as player contracts and the transfer system.” – Guardian

1 Royal Portrush: Golf clubs ‘in real distress’ as eyes turn to 2021
2 Rodgers shunned by some family members for leaving Celtic
3 Colin Kaepernick’s exile is too fresh for NFL to speak out on US protests
4 Ken Early: Why international football is fading into obscurity
5 Connell losing touch with club championship is real tragedy of Normal People
Real news has value SUBSCRIBE
Crossword Get access to over 6,000 interactive crosswords