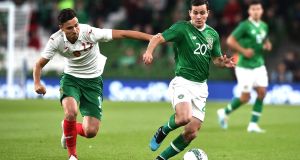 Midfielder Josh Cullen has been called into the Ireland squad for the Euro 2020 playoff semi-final against Slovakia on Thursday. Photograph: Charles McQuillan/Getty Images

Newly signed Anderlecht midfielder Josh Cullen continued what has been a busy week on Tuesday afternoon by joining up with the Irish squad in Dublin just before its departure for Bratislava where Stephen Kenny and his players touched down early in the evening.

The 24-year-old, whose move to the Belgian club was only confirmed on Monday, was called up to replace Harry Arter with the Nottingham Forest midfielder pulling out of the trip for Thursday’s Euro 2020 playoff semi-final against Slovakia with a thigh strain sustained while playing a league game at the weekend.

Cullen, who has two senior caps, both of them earned in friendly games, had been on standby for the squad since last week and Stephen Kenny spoke positively about him on Sunday when he observed that the midfielder “is a good player, a very good player and he does all the simple things really well and seems to have a super attitude”.

The rest of the squad trained at Abbotstown before departure although three support staff were forced to stay at home after one tested positive for coronavirus and the other two were deemed to be close contacts. Kenny, the other key members of his coaching staff and all of the players tested negative and will now be in a bubble until they return home after the game.

There is still no confirmation from the Slovak FA as to whether one of their key players, Stanislav Lobotka, will be allowed to travel home for the game after members of the Napoli squad were ordered to quarantine by local health officials in Italy.

“Stano is still in Naples, but I believe he will come because he was twice negative,” said Slovakia coach Pavel Hapal who has already been hit by two withdrawals – Lubomir Satka and Michal Duris – the former because he had been in contact with somebody who had tested positive.

Hapal said that Lobotka was waiting to be tested again but Napoli said on Tuesday that the latest round of tests had all come back negative too and it seems likely in the circumstances that the 25-year-old will ultimately be allowed to travel.

The FAI, meanwhile, has been forced to suspend grassroots and underage football across the country due to the changed level of Government restrictions relating to the pandemic and Friday’s first division game between Galway United and Drogheda United had had to be postponed after two members of the home team’s squad tested positive for the virus.